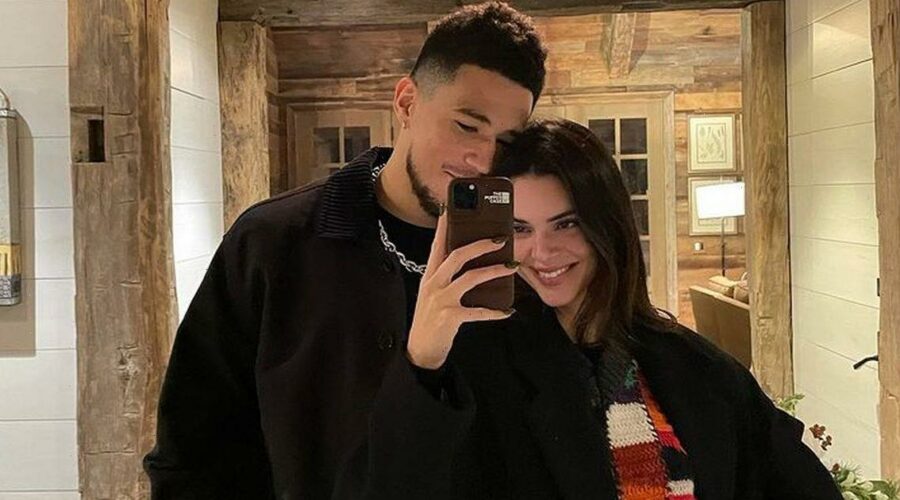 Kendall Jenner’s boyfriend Devin Booker has sparked marriage speculation among some fans, as they spot a gold band on his ring finger.

The model, 26, and her NBA star, 25, beau can be seen cosying up in a new photo posted on social media after the couple took a romantic trip away to celebrate New Year’s Eve.

In a gallery posted to Instagram which the star captioned ‘my weekend’, the star can also be seen posing with a bottle of her own brand 818 tequila in an oversized jumper while wearing a crown with ‘Happy New Year’ written across it.

Kendall also posted photos of the view from their accommodation and a photo of herself posing in sunglasses outside the large country farmhouse.

However, fans were most interested in the selfie of the couple, who are thought to have been together since 2020, pointing out a ring that Devin is wearing on his ring finger.

The couple have been linked since they were spotted on a road trip to Sedona, Arizona in April 2020.

Their New Year’s trip is not the first holiday the couple have taken over the last few months, with the pair taking a luxurious holiday to Sardinia in Italy last summer.

A source previously told People: "This is the happiest Kendall has ever been in a relationship. She and Devin started out slowly, but have dated for about a year now."

In February, a separate insider told the publication: "What first seemed like a fun hookup, is now a relationship. They are exclusive and Kendall is very happy with Devin.

It was added that Kendall's famous family also like Devin, and "he was even invited to Kim's 40th birthday celebration in Tahiti."

Prior to Devin, Kendall was lined to the likes of singers Harry Styles and Justin Bieber, as well as basketball stars Blake Griffin and Ben Simmons.

Stay up to date with all the latest on your favourite stars by signing up to OK!'s daily celebrity newsletter.