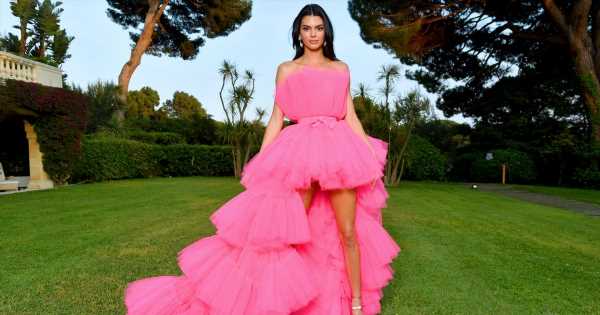 This year's amfAR Gala is a glitzy showbiz bash at Hotel du Cap-Eden-Roc in France and is part of the Cannes Film Festival.

The celeb-filled event saw a number of A-listers arrive, with spectacular outfits the order of the day on the red carpet.

With so many stunning arrivals, it took something special to stand out from the crowd but the likes of Kendall Jenner and Pamela Anderson did just that, along with a number of celebs that showed the Gala is one of the must-attend events of the season.

Former Baywatch star Pamela Anderson, 51, was the picture of elegance in a pastel pink gown that was set off by its ruffles.

Canadian Model Winnie Harlow, 24, lit up the red carpet in a multi-coloured dress which was accentuated by a 'poofy' black train.

Singer Dua Lipa meanwhile was a burst of colour in a red dress with a thigh high split.

The 23-year-old wore a tiered fluffy dress and put the red carpet to shame when it came to bringing that colour to Cannes.

Charli XCX struck a rather different look to her normal extravagant entrances.

The 26-year-old British singer can take some big risks on the red carpet but her Cannes outfit was a demure pinky white gown that was elegance personified.

Swimsuit designer Kimberley Garner, 29, swooped into the Gala with a sequinned white gown that was offset by a cape that gave the impression of giving Kimberley angelic wings.

Victoria's Secret angel Stella Maxwell, 29, channeled Disney's frozen with an ice blue Atelier Versace gown which had diamonds and shards of mirrors, that gave the effect of icicles dripping down the dress.