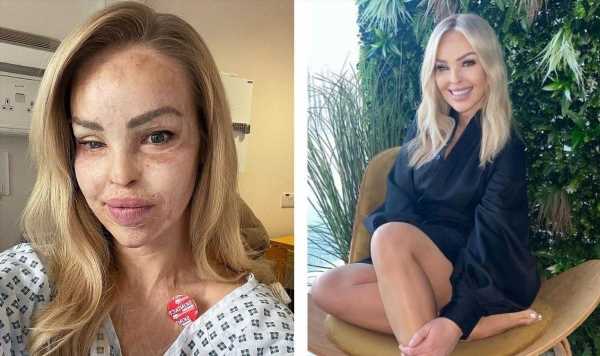 Brave Katie Piper suffered scarring, facial disfigurement and severe trauma after a bitter ex-boyfriend and his accomplice threw acid in her face 14 years ago, at the tender age of 24. However the TV presenter and model has now spoken candidly on how she coped, in the first episode of a brand new Pride of Britain podcast series, launching tomorrow.

We have all got [resilience] in our core, but we usually don’t tap into it until that’s the only choice we have left

Katie launched her own foundation after the attack, proving that she wouldn’t let it define her or break her – and she even received an OBE from the Queen.

However she has now confessed that her attitude hasn’t come as easily as it might seem.

“I really worked on that belief of being resilient and that resilience is something we all have,” she admitted. “That pedestal of being inspirational is a bit of a façade.

“We have all got it in our core, but we usually don’t tap into it until that’s the only choice we have left.”

At first Katie believed her ex-boyfriend had successfully sabotaged her modelling career, due to the impact the attack had on her appearance.

However, she went on to have a successful career in the public eye, continuing to model and present on television, after harnessing her own self-belief.

“I do believe sometimes in life that the only answer is within you,” she insisted.

“The only person that can make your life really bloody brilliant is yourself.”

All of her self-belief paid off, as she was able to help those who had suffered similar incidents to make a physical and emotional recovery.

Earlier this year, she received her honour from the Queen and issued a statement on her foundation website about the milestone and how far it meant she had come.

“This is without doubt, one of the happiest times of my life,” she wrote after receiving it.

“I am so honoured to be recognised on the Queen’s New Year’s Honours list for services to charity and survivors of burns.”

She added: “I’m very proud to say that we’ve helped and rehabilitated thousands of survivors of burns and people with scars from traumatic incidents, with their physical and mental recovery.

“Funded purely by voluntary donations, we launched and founded the UK’s first and only live-in rehabilitation centre so that having a brighter future after burns can be for the majority, and not the minority of survivors.

Offering a heart-rending message of support, Katie continued: “The charity and the honour is in my name, but so many survivors are at the heart of it all.

“This OBE is ALL of us. Thank you for following, supporting and joining my life’s journey.”

Katie will now appear on the inaugural episode of a new weekly podcast series, where she can be heard chatting to Carol Vorderman in great detail.

The series was launched in honour of the Daily Mirror Pride of Britain Awards, which has “celebrated Britain’s unsung heroes” for the past 23 years.