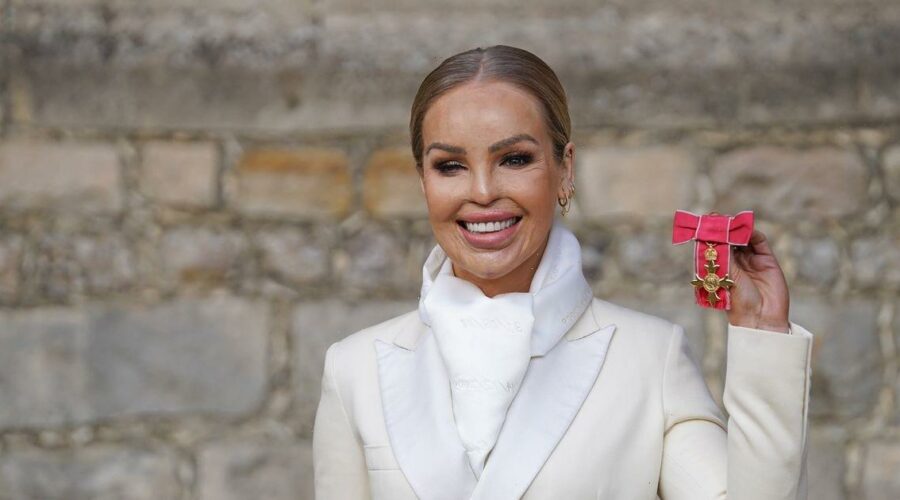 Katie Piper has received her OBE after being named in the Queen’s New Year Honours list last month.

The inspirational Loose Women star picked up the award for her services to charity and fellow victims of burns and other disfigurement injuries.

Katie was given her honour by Anne, Princess Royal at Windsor Castle on Wednesday.

The mum-of-two looked stunning in a white suit as she smiled and posed with her medal outside the castle.

When asked how she continues to inspire positivity in people who have experienced life-changing burns and injuries, she told the Evening Standard: “Trauma is part of life, but it doesn’t have to be a life sentence.

“With the support of a charity or organisation it’s a lot easier to re-integrate back into society and what you knew as normal because you now have a new normal", she added.

The model experienced life-changing facial burns after she suffered an acid attack in 2008 by her ex-boyfriend. She rose to fame with her Channel 4 documentary in 2009, Katie: My Beautiful Face.

Since then, the star has set up the Katie Piper Foundation, a charity where "survivors are at the heart of the organisation."

"Guiding our work and informing our decision making, nobody can make a bigger impact on survivors of burns than survivors themselves", the organisation states.

Speaking about her OBE in January, Katie revealed receiving the honour was "one of the happiest times of my life".

"I am so honoured to be recognised on the Queen’s New Year’s Honours list for services to charity and survivors of burns," she wrote on the Katie Piper Foundation website.

Katie described on Loose Women how she found out the news of her honour but nearly missed the deadline for accepting the award.

Speaking on the ITV show, Katie, 38, told the panel: “Actually, it’s quite a funny story. When I first set my charity up eleven years ago, we very kindly had an office for free for the year.”

“And the award, for some reason, went to that old office address. So I didn’t reply back, so I nearly missed the cut-off date of actually accepting the honour", the popular TV personality explained.

The mum-of-two eventually found the letter and realised just in time to accept the Queen's invitation to become an Officer of the Order of the British Empire.

There were some other famous faces at the castle too, as EastEnders star Nina Wadia joined Katie.

The actress received the award for services to entertainment and her charity work for organisations including Save the Children and Diabetes UK too.

The comedian wore a striking blue dress from Bombshell HQ with a silver Vivienne Westwood bracelet for the ceremony which she attended with her husband, composer Raiomond Mirza.

To stay up to date on all the latest news on Katie Piper OBE and more of your favourite stars, sign up to OK!'s daily newsletter.

02/10/2022 Celebrity Comments Off on Katie Piper beams as she receives OBE: ‘Trauma doesn’t have to be a life sentence’
India