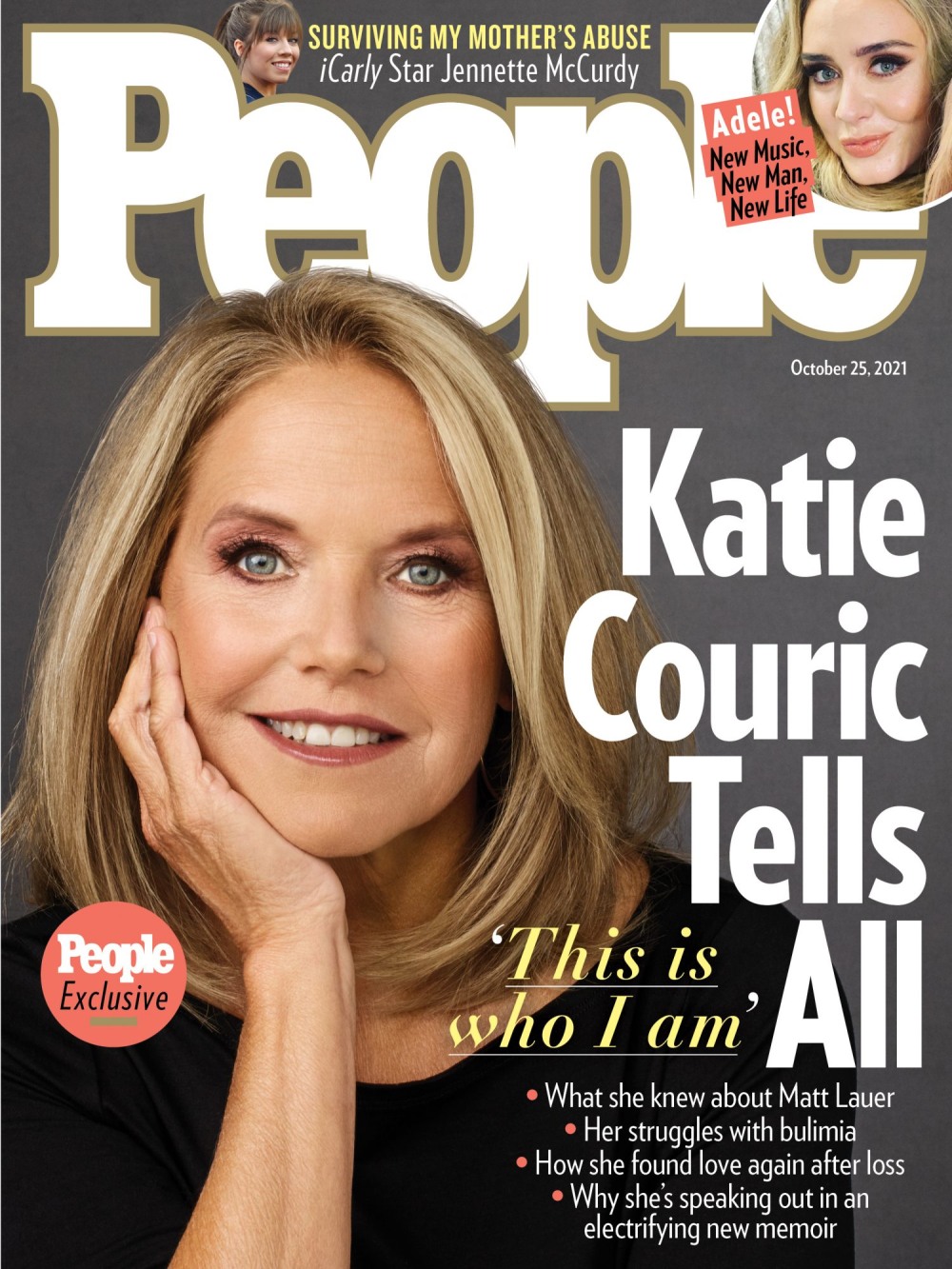 Katie Couric’s memoir, Going There, comes out later this month, but we’ve already seen a lot of quotes from it, as it seems like the NY Post and the Daily Mail got their hands on some select chapters. Couric does not come across well, at all. She comes across like a woman who hates other women, who feels threatened by anyone younger and good at their job, who spent years lording her status over everyone else. If the excerpts we’ve seen so far are any indication, Couric does not come across as truly reflective or even ashamed of her old behavior and worldview. Her old colleagues are appalled, but many of them saw behind the mask long ago as well. Anyway, Couric covers the new issue of People Magazine, and the cover story has some excerpts from her book, with a brand new interview where Couric IS suddenly very reflective, especially about Matt Lauer. We’ve already heard some of her sh-t about Lauer, which seemed like she didn’t believe Lauer’s victims and she still considers him a good guy. Let’s watch her damage control unfold! Some highlights from People:

On Matt Lauer: “What upset me the most about hearing these stories [was] that obviously [his behavior] was grossly inappropriate, but also it just seemed so callous. And that’s not the Matt I knew. There’s a duality in human beings, and sometimes they don’t let you see both sides.”

On the Me Too movement: Couric said her thoughts about her former colleague are informed by the Me Too movement that has changed the national conversation about consent and sexual harassment. “I think we’ve learned a lot,” she says of the shift that’s happened since she first entered the newsroom. “I think our understanding of what is a consensual relationship has changed dramatically, and now we know if there is a power dynamic, it can’t really be considered consensual.”

She didn’t notice anything alarming about Lauer’s interactions with other women: “He might comment on a movie star or something, saying, like, ‘Oof, she’s unbelievable.’ He was admiring of beautiful women. But I never felt he was pervy or inappropriate in my presence, ever.”

She thought he was a “player”: “I think we have all these euphemisms that we used to use for bad behavior — and player was one of them. He was a flirt. Certainly I read that he was unhappy in his marriage. But, honestly, I never had that discussion with him. I think it’s hard for people to understand that we didn’t share intimate parts of our lives with each other. I could count on one hand the times that I talked to him as I would a confidant or a really close friend.”

She didn’t know about his inappropriate behavior in the office either: “Our offices were next to each other, and so I think when he engaged in this kind of behavior, he was extraordinarily secretive about it. I [had] heard a few pieces of gossip, that he was involved with an anchor, and I remember thinking, ‘Who knows if this is true?’ I think it was considered nobody’s business. At many news organizations in the ’90s and early 2000s there was a lot of inappropriate fraternization.”

She did know Lauer sexually harassed a producer in 2004: “I remember being shocked and disappointed. But also I think I thought more about the infidelity aspect than the idea that he was taking advantage of someone. The idea of something being consensual was interpreted very differently than it is now. If I had to do it again, I would have made sure that young woman was okay.”

It took her a long time to process the claims against Lauer: “It took me a very, very long time to kind of come to terms with it. Also, to appreciate the damage that was done to women who were taken advantage by many powerful men.”

How she feels about Lauer now: She confirms that she is no longer speaking to Lauer. And while she believes that “we’re starting to look at, as a culture, certain offenses — and I’m not putting Matt in this category, but where is there room for redemption, personal growth and grace, it’s not for me to say with Matt. It’s really not for me to forgive him. This is Matt’s story, and it’s the story of the people he exploited.”

Yep, this is damage control from Couric, because the early excerpts/quotes from her book made her sound like she knew some (not all) of what Lauer was doing to women and she turned a blind eye to it, and perhaps is still turning a blind eye. This interview was what people thought her book would be like: reflective on how we, as a society, rationalized predatory behavior and excused powerful men. As uncomfortable as this is to admit and acknowledge, she is right about the “rumors” about Lauer at the time – people thought he was a sleazy womanizer and adulterer, not a rapist. We thought he was having consensual affairs, not abusing, assaulting and harassing coworkers. Except I’m not sure anyone will really believe that Couric had no idea whatsoever, especially since (as she even writes in her book), she was aware that he sexually harassed a producer in 2004. 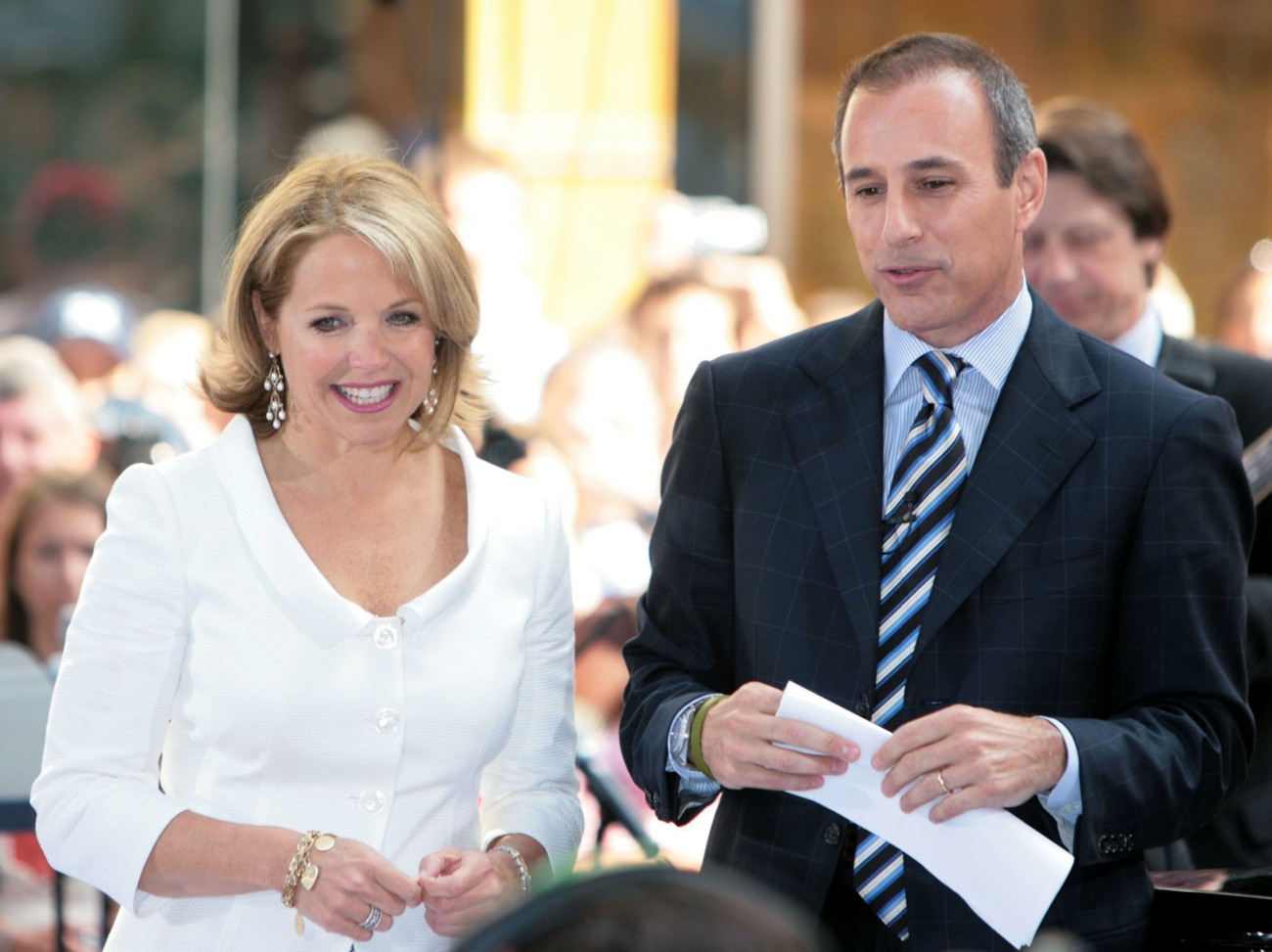