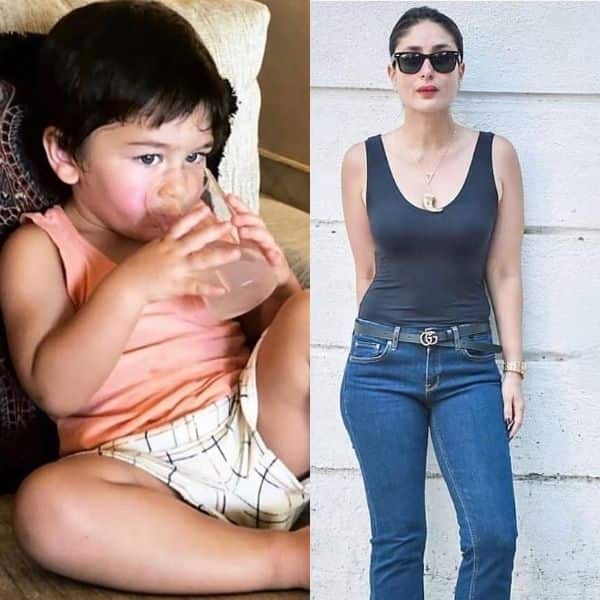 Saif Ali Khan and Kareena Kapoor Khan’s adorable munchkin Taimur Ali Khan is not only a star kid but an internet sensation as well, who the nation adores BTW. From waving to telling his friends in the media that ‘It is Tim’, the chote nawab of Bollywood has given us many moments to gush over him for. And for the same reasons and more, the paparazzi is always waiting odd hours to click his many moods. But Taimur Ali Khan sure knows how to keep his admirers amused and entertained. Be it with his adorable gestures or guffaws, when he sees his friends from the press, he is an absolute favourite.

But turns out he sits out on some of the fun at birthday parties he goes to cause he is not allowed to eat anything. No, don’t feel bad, he has lots of healthy, home-cooked food courtesy fit mommy Kareena. The actress, in a recent interaction with dietician Rujuta Diwekar, said that she is a very particular what Saif and her two-year-old eats. When asked if Baby Tai has home-cooked food, she said, “Only (home-cooked food). I am hyper-paranoid. He goes to birthday parties and he is not allowed to eat outside. But that’s also wrong but ya…”

Although Saif who was a part of the LIVE stated that “he eats chips”, Kareena continued how Taimur has “khichdi, idli dosa… healthy kind of home-cooked food”. The diva also added, “So I sit on a plan also. Every month I alternate it accordingly. Whatever fruits and vegetables he should be eating in the month… he quite enjoys it. Today, he actually had saag (spinach) for lunch and he normally didn’t like it but I have been shoving it down his throat. So now he’s got used to it. So he actually ate the whole bowl.” Now, that’s something.

On the work front, Kareena Kapoor Khan will be seen in Good News opposite Akshay Kumar. The film also stars Diljeet Dosanjh and Kiara Advani in pivotal roles and is directed by Raj Mehta. The film is set to hit the screens on December 27 and will clash with Salman Khan’s Dabangg 3. She also has Irrfan Khan’s Angrezi Medium where she will be seen as a cop. She will start shooting for the same some time in June. Recently producer Dinesh Vijan had spilled the beans on Kareena’s character in the comic drama. He had told Hindustan Times, “Kareena is a great addition to our franchise! Angrezi Medium is a very special film, and I’m excited that she’s going to be a part of it. We wanted to introduce this character who would be taken forward in the franchisees to come, and she’s perfect for it.”

The Bollywood diva is also endorsing some top brands and is a much-sought-after name in the circuit. She is associated with a top cosmetic brand and her equity has increased after marriage and the birth of Taimur. A source told DNA After Hrs, “In the last 18 years, Kareena has been a consistent face of over 15 brands at any given point. Her brand equity has increased after marriage and motherhood.” Reportedly, she has bagged a whopping amount of Rs 11 crore to promote a health drink now and something tells us it’s just the beginning!