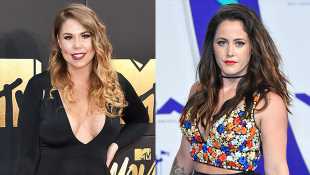 Kailyn Lowry is finally revealing her thoughts on Jenelle Evans after the recently fired ‘Teen Mom 2’ star lost custody of her three kids in a Columbus County courthouse on May 28.

Kailyn Lowry, 27, has finally opened up about her thoughts on her Teen Mom 2 co-star Jenelle Evans, 27, and David Eason, 30, losing custody of their three children. Speaking out with her Coffee Convos podcast co-host Lindsie Chrisley, 29, the duo made a joint statement. “We’ve been cautious when speaking on the issues regarding the Evans/Eason family until we had enough details to speak on the matter,” they told People. “The most important part of this situation and most concerning to us as fellow mothers is the safety of the children. After hearing the state of the home and things CPS uncovered, it is in the best interest of the children to remain outside of Jenelle and David Eason’s care. Wishing them nothing but the best & hoping all parties involved get the help they need to move forward.”

As we previously reported, Jenelle and David put on a united front in court to fight for the reality star’s two sons from Jenelle’s previous relationships, Jace, 9, and Kaiser, 4, as well as the couple’s two-year-old daughter, Ensley. The mom-of-three’s kids were removed from her care shortly after Jenelle revealed the heartbreaking death of her beloved French bulldog Nugget on May 1, which David took accountability for on the same day. Jenelle was also fired from her hit reality show by MTV as a result of the incident and that’s when Child Protective Services (CPS) launched their investigation into her children’s care.

Teen Mom 2 fans have seen Kailyn and Jenelle’s feud play out on their hit MTV reality show, and on social media for the past several years. The ladies recently made headlines once again after Jenelle took to Instagram live on Jan. 19 with her mom, Barbara, who said, “F**k Kail, I’ll kill her,” before laughing it off. And although Jenelle insisted her mom was just joking, we reported earlier that Kailyn was “not filming until something is done.”

05/29/2019 Celebrity Comments Off on Kailyn Lowry Shades Jenelle Evans After She Loses Custody Of Kids: She Needs To ‘Get Help’
India