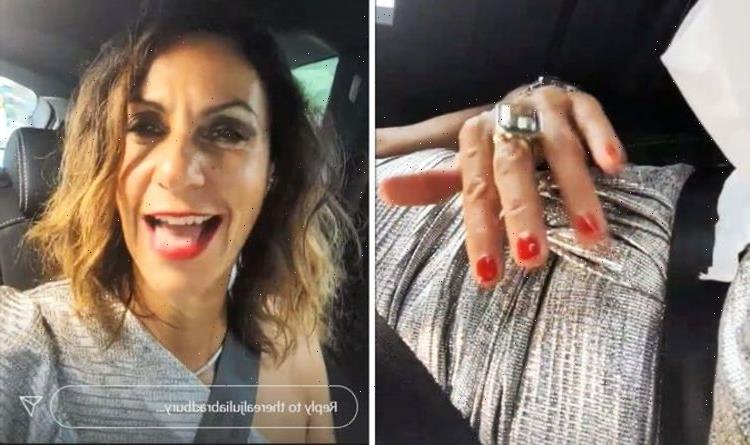 Julia Bradbury gets ready in car on way to NTAs

TV presenter Julia Bradbury has taken to Instagram to address her “swollen” stomach, as she was chauffeured to the NTAs this evening. The star told how she had a manic car journey to the prestigious, star-studded ceremony, which included her painting her nails and even eating her dinner, as she claimed that the food at the event isn’t “very good”.

Well it’s not that it’s not very good, it’s just not that healthy

Wearing a glitzy silver jumpsuit, the mother-of-three revealed why it was that she felt bloated as she travelled to the O2 Arena.

In view of her 102,000 followers Kate gave a run down of what she had been up to on the drive to the awards ceremony.

Appearing in the back of a car, she said: “Hello, hello, so this is what it’s like heading to the National Television Awards.

“It takes ages to get there so I’ve basically got my little make-shift office in the back of my car.”

Julia continued: “He is so good, he puts up with everything I do in the back of the car.”

The star revealed that she even managed to fit in a last minute manicure into her car journey.

“I’ve just painted my nails, I’ve managed to get all 10 nails done, we’ve done it in between traffic light stops,” Julia confessed.

In addition to painting her nails, the TV host told how she had her dinner on the go.

“I’ve had my dinner, I’ve had a nice healthy load of food that I had in there,” Julia stated, whilst waving around an empty jar.

“It was sort of barley salad with nuts and seeds and all that because the food’s not very good [at the NTAs].”

Quickly correcting herself, Julia explained: “Well it’s not that it’s not very good, it’s just not that healthy.

“So I wanted to stock up on the healthy stuff.”

But despite attempting to be healthy, the TV personality revealed that she was now bloated as a result of digesting the grain.

Panning to her stomach, Julia said: “My tummy’s got a little bit swollen because of the barley that I’ve eaten and I’ve finished my make-up and that’s it, I can actually relax.”

“I’ve been tested anyway, Jerry’s been tested, so we’re staying safe, the window’s are open in here,” she said.

But despite the coronavirus measure she had taken, Julia revealed that she faced backlash for not wearing a mask in the car.

Explaining herself, Julia said: “Some people have complained about masks but I can’t put my make-up on and do the mask.

“Anyway, be safe everybody, have a lovely evening and yeah, I’m not going to have a late night, but I’ll have a fun night,” she said, before signing off.