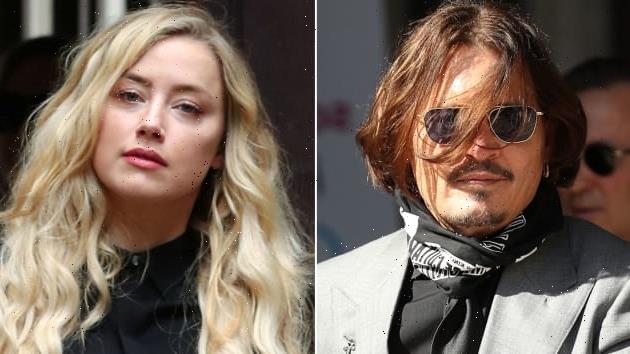 Throughout the Johnny Depp-Amber Heard defamation trial, both sides have offered shocking accounts of abuse that allegedly occurred during the actors’ brief marriage,

Depp took the stand first and claimed that Heard punched him, put out cigarettes on his face, and severed part of his finger by throwing a liquor bottle at him.

But those allegations paled in comparison to the one’s made by Heard during her own time on the stand this week.

On Thursday, Heard alleged that Depp sexually assaulted her with a glass bottle during an altercation that took place in Australia while he was filming the fifth Pirates of the Caribbean movie.

Heard’s testimony sent shockwaves across social media yesterday, and a spokesperson for Depp was quick to issue a statement refuting her claims.

“As Mr. Depp’s counsel correctly predicted in their opening statements last month, Ms. Heard did indeed deliver ‘the performance of her life’ in her direct examination,” reads the statement issued to People magazine.

“While Ms. Heard’s stories have continued to grow new and convenient details, Mr. Depp’s recollections have remained exactly the same throughout the six painful years since her first allegations were made,” Depp’s spokesperson continues.

“His truth — the truth — is the same no matter the environment in which it has been presented.

“The upcoming cross examination from Mr. Depp’s team will be most telling, and will certainly highlight the many fallacies Ms. Heard has now attempted to pass off as fact throughout her convoluted testimony.”

Heard’s team quickly shot back with a statement of their own in which they blasted Depp for lying to the public and “attacking the victim.”

“As evidenced by the statement just released, Mr. Depp’s defamation claim is falling apart so rapidly that his counsel are turning from prosecutor to persecutor,” their statement reads.

“They boast that Mr. Depp’s story has not changed,” Heard’s the spokesperson continues.

“If so, since he lost the Domestic Violence Restraining Order and he resoundingly lost the libel case in the UK, perhaps he should consider a new strategy rather than the recycled approach of attacking the victim, and refusing to take responsibility for his own conduct.”

From there, the spokesperson pointed out alleged inconsistencies in Depp’s testimony.

“If Mr. Depp was truly innocent, why has he repeatedly apologized to Ms. Heard and promised to put the ‘monster away for good,’ ” Heard’s spokesperson says, adding that Heard has been disappointed in Depp’s “inability to distinguish fact from fiction — a malady which appears to have spread to his legal team.”

“That same team is so panicked they are fighting tooth and nail to prevent compelling evidence and photos from being introduced,” says Heard’s spokesperson.

“Small wonder Mr. Depp does not have the fortitude or courage to even look at Ms. Heard at all throughout the proceedings — as he could not in the UK trial — and, instead he doodles and snickers.”

That remark seems to be in reference to Depp’s habit of drawing on a sketchpad in court, a tendency that he’s exhibited several times but not, it appears, during Heard’s testimony.

“Mr. Depp’s behavior in this trial has been as pitiful as it was in their marriage,” the spokesperson concludes.

“Apparently, they feel they must double-down on their demonstrably losing two-part strategy: distract the jury and demonize the victim.”

Heard is expected to take the stand today for a third day of testimony.

The trial, which is currently in its fourth week is scheduled to last for six weeks.

Depp is suing Heard for $50 million in connection with a 2018 Washington Post essay in which she identified herself as a victim of domestic abuse.

We’ll have further updates on this developing story as more information becomes available.

05/06/2022 Celebrity Comments Off on Johnny Depp: Amber Heard Is a Liar. I Never Sexually Assaulted Her
India