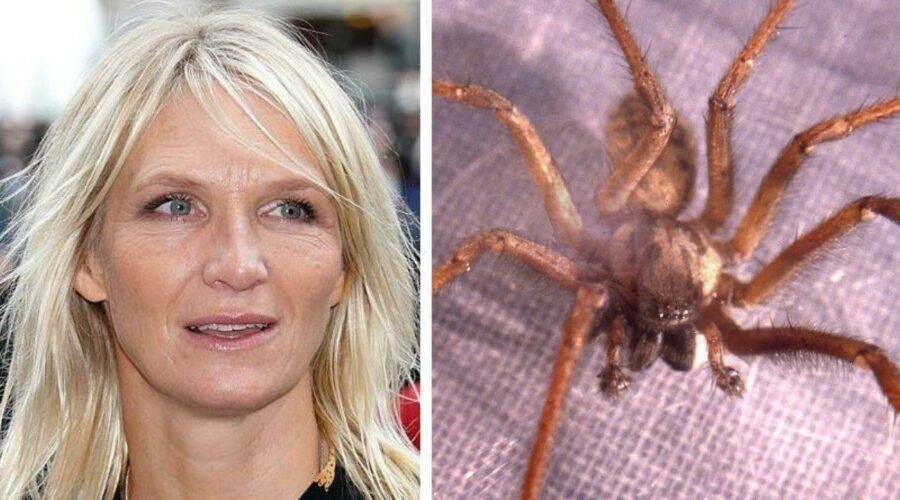 Jo Whiley had been unaware of the spider’s presence until she caught sight of herself in the mirror and got a nasty shock. The BBC Radio 2 presenter shared her woes with her 366,000 Twitter followers today.

When you catch your reflection in the mirror and realise that’s not a badge you’re wearing on your chest but a Giant House Spider!

“When you catch your reflection in the mirror and realise that’s not a badge you’re wearing on your chest but a Giant House Spider,” she quipped.

Adding a creepy-crawly emoji to her post, she added: “Eratigena Atrica”.

Followers were not much help, teasing in the comments that the breed could potentially live – and continue terrorising her – for up to 26 years.

Meanwhile Twitter user @phyllisgobbler confided: “I can barely even scroll anywhere near the photos of – any and all – the spiders let alone imagine wearing one of those terrifying beasts.”

@PsueDenim was equally terrified by the images, exclaiming: “Dear God! How am I meant to sleep now?”

Meanwhile other fans claimed they would have fainted at the sight of such a large “beast”.

@misslambeg predicted her own extreme reaction, telling Jo: “I would have been totally cool and fine with that. *fine means peel my own skin off then set fire to myself and the entire house!”

@RomanzaRose shared their own experience of the critters, recalling: “Had a bunch of baby spiders drop all over me last Summer, when exercising outdoors ie. doing pull-ups in the branch of a new tree.

“Me rocking the tree arm & disturbing the nest. Freaked me out.”

Meanwhile some fans used the opportunity to express their frustration that former X-Factor singer Will Young was no longer covering her radio absences.

@fairyfootsteps4 quizzed her: “Why is Will Young not doing your show in your absence anymore ? He was so good and entertaining, people loved his shows.”

@thehiddle agreed: “We miss @willyoung doing your shows… he was awesome. We want him back @BBCRadio2.”

Jo Whiley has been well known for years for introducing musical acts to the British public.

Some consider her responsible for turning Oasis, Blur, Coldplay and Pulp into household names via the exposure she gave them on BBC Radio.

Jo has also turned therapist to stars suffering stage fright in her time, once revealing that she had to halt a pre-Glastonbury interview with Adele due to the songstress dissolving into floods of tears.

The Hello singer had been due to perform at the festival’s Pyramid Stage, but according to Jo, she was “absolutely panic stricken”.

“She was saying how much Glastonbury meant to her, and she’d been going since she was a child,” Jo recalled to The Sun at the time.

However, she confirmed that when she got out on the stage, all Adele’s nerves simply “melted away”.