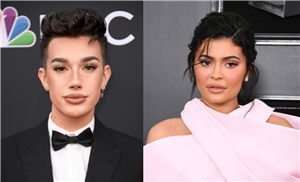 James Charles is setting the record straight about one of his friendships in the aftermath of his highly publicized feud with fellow YouTube star Tati Westbrook. It’s been a whirlwind couple of weeks with all the drama that’s been going down in the beauty-verse, with influencers and celebrities picking sides and unfollowing Charles on Instagram. Now that the dust has settled, the makeup blogger is clearing the air about one reported unfollow in particular, and he’s claiming some new details appear to shed light on what actually happened. James Charles’ response to Kylie Jenner reportedly unfollowing him shows they’re still very much "sisters" and there’s no bad blood between them. Elite Daily reached out to Jenner’s rep for comment and confirmation regarding Charles’ claims, but did not hear back by the time of publication.

If you’ve been following along on all the drama that went down earlier this month, you might remember that Kylie Jenner was named as one of the many celebrities and influencers who reportedly unfollowed the makeup guru on Instagram following an explosive 43-minute video that Westbrook shared where she slammed him for using his "fame, power and money" in personal relationships and exhibiting predatory behavior to straight men, among other things. Elite Daily previously reached out to Charles’ rep for comment on Westbrook’s claims, but did not hear back by the time of publication.

While Charles released an apology video where he said he was "learning and growing" from his mistakes, the fallout was swift and it felt like literally everybody was taking sides. The YouTuber lost over 3 million subscribers on the social media platform, as well as 1 million on Instagram. According to a story from Metro, celebrities like Kim Kardashian, Demi Lovato, Miley Cyrus, Ariana Grande, Iggy Azalea, Katy Perry, and Shawn Mendes reportedly unfollowed the star in the wake of the controversy, as well as fellow makeup entrepreneur Kylie Jenner.

Since then, Charles released a lengthy "No More Lies" where he came armed with receipts to put Westbrook’s allegations to rest. While she and Jeffree Star didn’t correct their claims, they did apologize for how they handled things, and the drama was finally put to rest.

Since then, it looks like Charles has slowly been mending his relationships with several people who unfollowed him, but his friendship with Kylie Jenner? Apparently that never needed mending in the first place.

On May 21, the influencer was one of the select few who were invited to Kylie Jenner’s Kylie Skin launch, and he posted a photo with the Keeping Up With the Kardashians star on Instagram with the caption "sisters."

Considering that Jenner was one of the celebrities who reportedly unfollowed Charles and still doesn’t follow him now that the drama is over, people were understandably confused.

In a screenshot from @CommentsByCelebs, one person commented, "But she unfollowed you lol."

James responded, "She never followed in the first place lol stop believing everything you read on the internet." Elite Daily reached out to Jenner’s team for comment on James’ claim, but did not hear back by the time of speculation.

It’s not the first time that the YouTube star has cleared the air about his relationship with friends in light of the feud, and it’s probably not the last. On May 18, he revealed that contrary to speculation, he and the Dolan brothers were never feuding in the first place, and from the sounds of things, fans might have read the situation with Jenner wrong.

Now that Charles has put that rumor to rest and clarified where he stands with Jenner, here’s hoping that this is the last we hear about the feud.