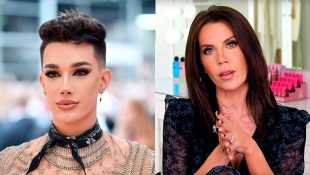 Sorry, sisters. James Charles is no longer going on his tour across the country following the huge drama the last couple of weeks after Tati Westbrook’s ‘Bye Sister’ video on YouTube.

James Charles, 20, announced on his Instagram Stories on May 24 that he canceled his tour. “Obviously, a lot has gone on in the last few weeks, which has led many people, including myself, wondering what was going to happen to tour,” he said. “And after the last week of meetings and phone calls and trying to figure it out and talking to myself, my tour company, and my friends and family, we’ve officially come to the very, very tough decision that I am canceling the Sisters Tour.”

“Now I know this sucks, and people are going to be upset and sad about it and trust me, I am really not happy about this either,” James continued. “I’ve been looking forward to this for so long, but there are reasons why and I’m going to discuss them. And there are a lot of positives to this, too.” James had planned a 24-city tour around the United States filled with “music, makeup, and memories” and James had said it was a “dream” of his to tour.

“I made the decision to pull the tour,” James added. “This was 100% my decision. None of the venues pulled out, none of the brands that were going to be sponsoring it pulled out, and keep in mind it was almost completely sold out and still, less than 1% of people who bought tickets contacted about refunds.” He said, “The Sisters Tour is not ‘canceled’ because I was ‘canceled.’”

James discussed that he doesn’t wanted to “think about” or “talk about” the events of the last couple of weeks “ever again.” “Let’s be real, it sucked,” he said. “It put me in a really, really bad place.” He said that even though he has posted sparingly on social media at events and smiling, that doesn’t mean he’s “better.” “I’m not better,” he said. “And I’m not back either. But I am trying to move on with my life and focus on good things that make me happy and that can take my mind off of things.”

He continued, “The main reason why I’m deciding to pull the plug on tour is because the next few weeks, and the next few months honestly, I said that I wanted to take time to myself and be with the people that love me and focus on things that make me really, really happy, which is makeup, and being with friends and family and getting my head back in the game of to where I’m very inspired to keep working.” James said that he wants to get back to “making people happy” with his content.

“It is my absolute number one biggest priority that when I do go on tour, because I still am, make sure you keep watching, that I’m able to walk on stage every single night with a huge smile and present the best version of myself to all of you guys.” James said that because of everything going on, he doesn’t feel like he can deliver the “best version” of himself right now. James promised that everyone who purchased a ticket to his tour will get a full refund next week.

The beauty YouTube world was rocked on May 10 when Tati uploaded a video detailing the end of her friendship with James. Her video included many false allegations about the younger YouTuber, which caused him to lose over three million subscribers. James posted a video on May 18 defending himself with receipts, proving many of Tati’s points incorrect. We hope the YouTuber gets the rest he needs after this stressful situation.