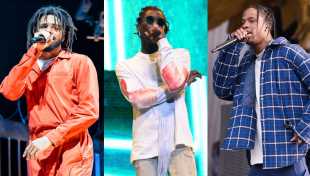 Young Thug enlisted the help of J. Cole and Travis Scott for a track perfect for that Uber ride before an epic night out. Consider this collab a gift to kick off summer 2019.

“Have a good summer” — that’s what J. Cole, 34, tweeted along with the link to his new track with Young Thug, 27, and Travis Scott, 28, called “The London.” The collab between the three household names dropped on May 23, and it’s already blowing up on Twitter. Cole and Travis are actually featured artists on this track, put out by Young Thug and produced by T Minus, but fans couldn’t help but point out Cole’s impressive flow. Grammy-winning singer Ella Mai was one of these listeners, who tweeted, “cole blacked on the london 🤯🔥.”  The sentiments were the same throughout Twitter.

Of course, Young Thug and Travis got Twitter love too. “This is the best song of the year no cap,” another fan tweeted, while many more conveyed their approval in fire-related GIFs, such as the smoking iPhone earphones below.

Cole has been on a roll with features in 2018 and 2019 — you can even catch a sly reference to this while listening to the track above. Summer isn’t due for another month (June 21 to be exact), and Cole has already teamed up with 21 Savage for “A Lot,” Ari Lennox for “Shea Butter Baby,” Offset for “How Did I Get Here,” and Ty Dolla $ign for “Purple Emoji.” Of course, there was his very own feature, “Middle Child,” which stunned fans after it dropped on Jan. 23.

Meanwhile, Travis’ Astroworld — Wish You Were Here Tour has made headlines with its carnival antics since kicking off in Nov. 2018, while Young Thug scooped his first Grammy award in 2019 (“Song of the Year”) for co-writing Childish Gambino’s “This Is America” along with the rapper and Ludwig Göransson.

05/23/2019 Celebrity Comments Off on J. Cole Collaborates With Young Thug & Travis Scott On New Song ‘The London’ & Fans Are Loving It
India