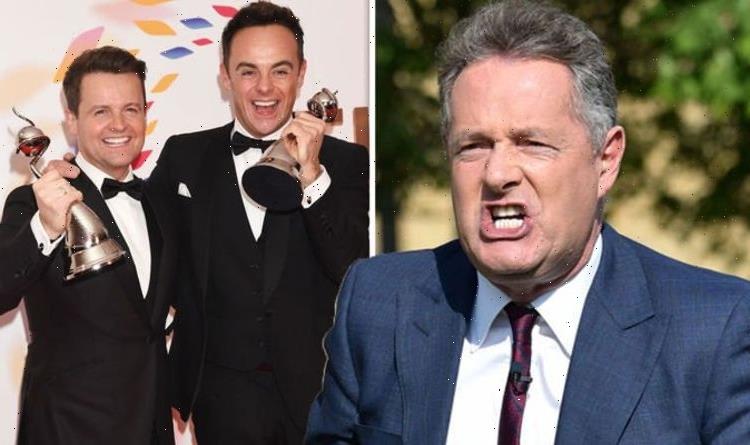 Former Good Morning Britain host Piers Morgan, 56, has claimed Ant and Dec will need “medical attention” if he wins a National Television Award (NTA) over them tonight. Anthony McPartlin, 45, and Declan Donnelly, 45, have won the Best Presenter prize at the NTAs for 19 years in a row.

Piers is nominated alongside Ant and Dec this year, as well as This Morning’s Holly Willoughby and Alison Hammond, as well as The Chase’s Bradley Walsh.

The TV anchor has claimed that his I’m A Celebrity… Get Me Out Of Here! rivals are “cheating” after being nominated as a duo in the category.

Despite the pair being a double act – who have always worked together as a package – the ex-GMB host claimed it was unfair.

Speaking ahead of the ceremony, Piers raged at the ITV favourites in a cheeky dig.

“If they had to do this individually, how would they get on? I think it’s actually cheating to do it as a pair,” he remarked.

Piers claimed viewers are “sick and tired” of seeing Ant and Dec scoop the gong every year.

He continued to the Mirror: “I deserve to win because everyone’s sick and tired of Ant and Dec automatically winning this award, which bears no relation to reality.

“I think it’s time the procession came to a shuddering halt and the Morgan bandwagon was rewarded with glory.

“We can’t have those two little vain-glorious Geordies standing there for the 20th consecutive year.”

He added: “Ant got [an award] one year when he hadn’t even worked. It’s ridiculous.”

Piers’ comments come after he was recently cleared by Ofcom over comments he made about Meghan Markle on GMB.

He has since taken to social media to urge viewers to vote for him if they are outraged he was forced to leave the ITV show for expressing his opinion.

Following his remarks on GMB about the Duchess of Sussex in March, Piers was urged by ITV bosses to apologise but he refused.

He admitted he can’t wait to see the look on Ant and Dec’s faces if he wins the award at this evening’s ceremony.

“Imagine the miserable expressions on the faces of those two,” he said.

“And if they not only don’t win… [but] have to see me trotting up and raising the award, you may have to have a medical team on standby to race in and make sure they’re OK.”

Piers joked: “We might need smelling salts for that one.”

The former GMB host took to Twitter today and said the NTA award was “coming home” in view of his 7.9 million followers.

He penned: “So many NTA jokes, so many sneers, but all those oh-so-nears, wear you down, through the years…

Piers accompanied the tweet with a series of photos alongside Ant and Dec, and his former GMB co-star Susanna Reid.

The National Television Awards airs tonight on ITV at 7.30pm.