Season 2 of the comedy, which dropped on the streamer in January, ups the stakes of the 19th century-, New England-set series as Emily moves from her private, literary life and into the public eye. “Whereas Season 1 was really all about Emily declaring to her father and mother that she was a writer and that there was nothing that they could do to stop her, Season 2 has her having won that right from her parents to have a voice and to express herself,” Smith said recently during Deadline’s Contenders TV. “But now confronting the issues of: Do I step into the spotlight? Do I try to publish? Do I seek fame?”

That is a key element of Smith’s script for Episode 6, “Split the lark,” which is the latest installment in Deadline’s It Starts On the Page, a series highlighting the scripts that serve as the creative backbones of the now-underway TV awards season. These scripts are being submitted for Emmy Awards consideration this year and have been selected using criteria that includes critical acclaim, selecting from a wide range of networks and platforms, and a mix of established and lesser-known shows.

In the Silas Howard-directed episode (like all of them named after a Dickinson poem), Emily hits the opera, where her attempts to connect with newspaperman Sam Bowles (Finn Jones) get … complicated, culminating in a serious onstage encounter with Ella Hunt’s Sue. But not before Emily declares that she wants to become famous.

Michael Sugar and Ashley Zalta executive produce Dickinson for for Sugar23 Productions along with Paul Lee and Josh Stern for wiip, Alex Goldstone for Anonymous Content and Steinfeld.

Check out Smith’s script below as we await Season 3: 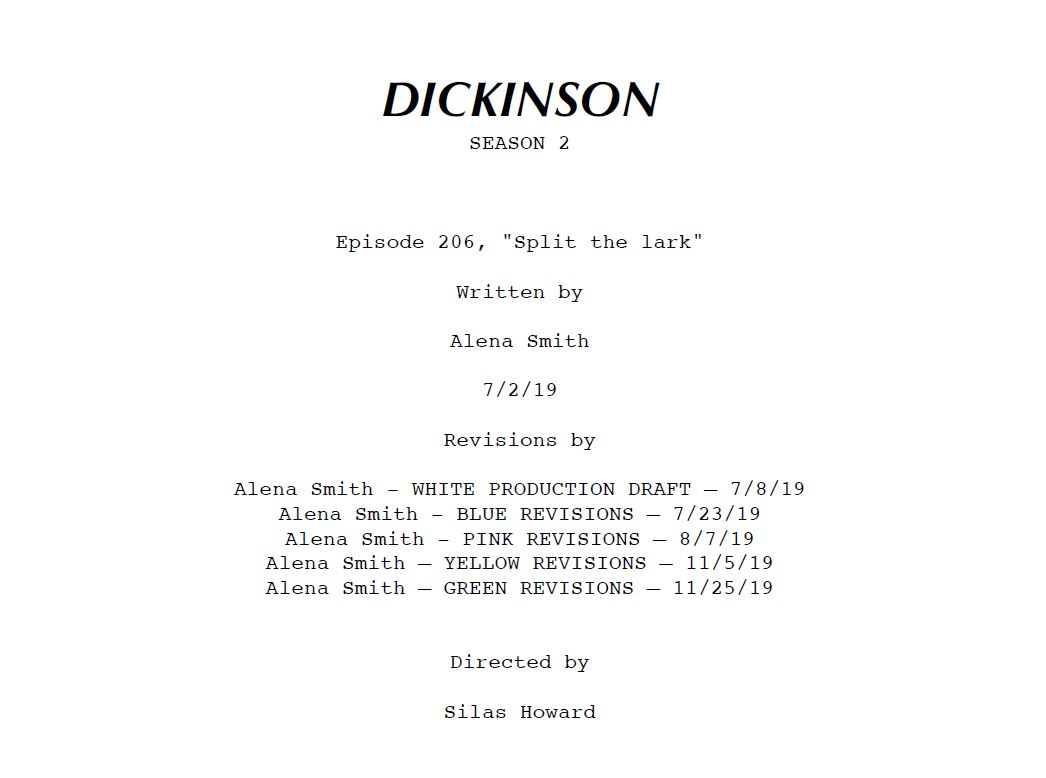 It Starts On The Page

It Starts On The Page: Read The Script For “Part One” Of ‘Your Honor’ Penned By Peter Moffat

It Starts On The Page: Read Noah Hawley’s Season 4 Premiere Script For ‘Fargo’

It Starts On The Page: Read A Key Script From Season 5 Of ‘The Expanse’

06/23/2021 Celebrity Comments Off on It Starts On The Page: Read An Operatic ‘Dickinson’ Season 2 Script By Alena Smith
India