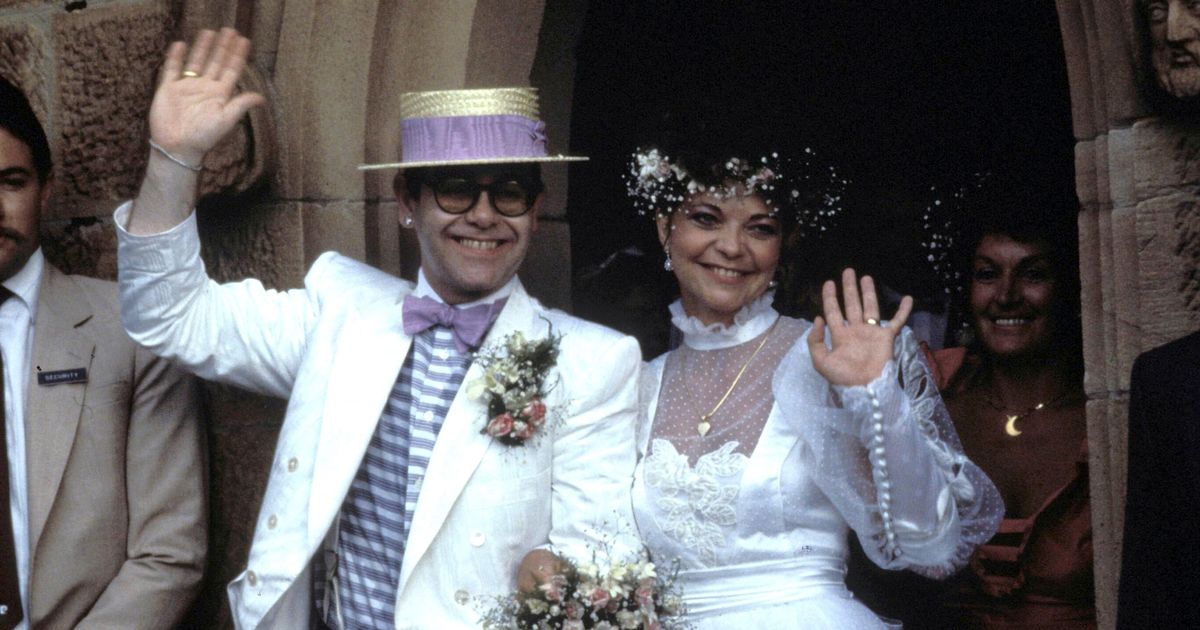 It was a beautiful Sydney day when Elton John walked down the aisle for the first time.

On Valentine's Day 1984 he said 'I do' to the stunning Renate Blauel – a move which floored most of his friends.

But he joked, "Halfway through the ceremony, the minister was saying a prayer and behind him, a cockroach crawled up the wall. I don’t know if it was a good or bad omen."

The marriage is only briefly depicted in Rocketman, the new movie about Elton's life with Taron Egerton playing the singer on screen but it actually lasted four years.

When news broke about Elton's desire to marry a 30-year-old German sound engineer and 'confirm' his heterosexuality, there was shock inside the music industry.

Rod Stewart summed up the feeling in a telegram to the singer that referenced one of Elton's hits.

He reportedly wrote: "“You may still be standing, but we’re all on the f***ing floor.”

Lesley-Ann Jones, a journalist at the time who covered Elton's career, said that the marriage was a 'convenience' that was designed to gain 'social acceptance' for Elton.

She said: "It’s like he.. decided to conform and have a ‘normal’ life. It didn’t happen."

Elton met Renate when he was recording Don't Go Breaking My Heart with Kiki Dee at AIR Studio in London.

David Motion, an assistant engineer on the song, said that Elton was 'in a bad place' at the time.

"There was quite a bit of cocaine. As far as I could tell, it was pretty much all for him," he alleged.

It wasn't 'love at first sight' with Renate but she had made an impression on Elton.

Barry Humphries recalls that Elton and Renate were "affectionately connected," and he thought: "He’s chosen this path, I hope it brings him great happiness."

Renate for her part was thought to be a 'reserved young woman' and 'very quiet'.

Elton, 36 at the time, proposed to Renate on February 10, 1984 while they had a curry at an Indian restaurant. They were married four days later.

Elton gifted Renate a dress made by Australian designed Keri Craig-Lee, which had 63 diamonds sewn into the bodice.

"Among the vintage wines was a 1978 Le Montrachet Chateau des Hebeaux Jacques Prieur, a bottle of which sold at Christie’s in 2000 for $683."

The effect of the marriage was immediately felt.

Lesley-Ann Jones said: "He owned a football club and there used to be homophobic chants on the terraces at the games. This all turned around a bit when he married a woman."

The 'happy' couple didn't have a honeymoon and when they were back home, they were quickly sleeping in separate bedrooms and having breakfast in silence.

People magazine reported in 1988 that Elton was now secretly meeting male lovers in hotel rooms, leading to him eventually barricading himself into his house, as negative stories about his sexuality started to be printed.

Renate was allegedly angry that she had been deceived and in 1988, the pair divorced with reports of anywhere between £4million and £40million being paid by Elton.

The singer had bought a cottage in Surrey for Renate and there she lived with the pair not reconciling their differences until 2007, when they started meeting for dinner and talking through the past.

In 1993, Elton met David Furnish and they were eventually married in 2014.

Speaking about his first marriage, Elton said: "I loved Renate. She’s a great girl. I ­really, really loved her. But, you know. It is one of the things I regret most in my life, hurting her.”