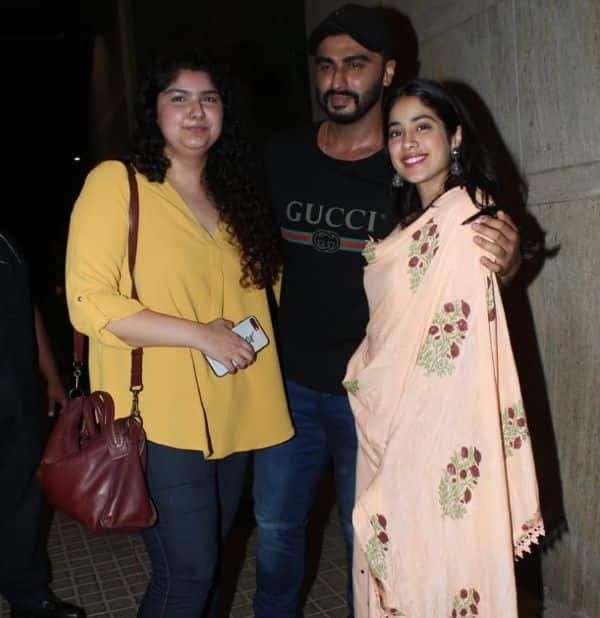 Arjun Kapoor’s India’s Most Wanted has hit the marquee today. The film has Arjun Kapoor playing the role of Prabhat Kapoor, an intelligence officer who leads a team of five people into unknown places in Bihar and Nepal to hunt down a dreaded terrorist who was responsible for the killing of 400 people. The film is different from other espionage thrillers as the force here is totally unarmed. Filmmaker Rajkumar Gupta who has delivered films like No One Killed Jessica and the super-hit Raid has helmed the film. He told us that the story of these unsung unarmed men touched him immensely and he took three years to draft the script. This is his first film with Arjun Kapoor and the collaboration has been a great experience for both. Last night, there was a screening that was attended by Vaani Kapoor, Malaika Arora, Pooja Hegde and Arjun’s sisters Anshula, Janhvi and Khushi Kapoor. The Dhadak actress was bowled over by her brother’s performance and wrote, ” “Go watch this film about faceless heroes and their untold story about protecting our country. Releasing tomorrow!!! @arjunkapoor A noble quiet hero. So honest and sincere.” 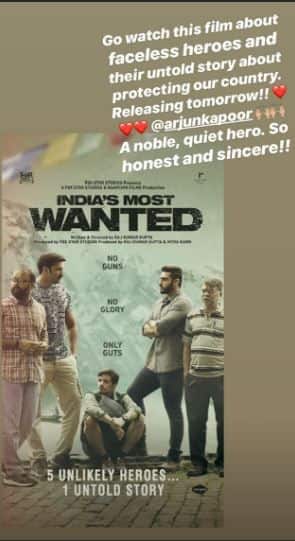 Janhvi Kapoor was busy shooting in Lucknow for her film that is tentatively titled, Kargil Girl. She came straight to the screening from the airport. Dressed in a pink suit, she looked damn pretty. The actress has grown close to Arjun over the past year. In fact, Arjun said he does not want to talk a lot about his relationship with his sisters as ‘Nazar Lag Jaati Hai’. He also revealed how dad Boney Kapoor is trying his best to be a friend to his kids at this age.

BollywoodLife’s editor Tushar P Joshi reviewed India’s Most Wanted writing, “Arjun Kapoor’s performance is restrained in the right places. The script has very little scope for drama and over the top moments. Arjun’s vulnerability becomes his biggest strength as Prabhat. His bonding with his men and the unflinching passion to safeguard his country from men with evil plans is well portrayed. Gupta also raises the interest bar by setting the film in Nepal and giving the story an unique twist.” Stay tuned to BL for more scoops and updates!

05/24/2019 Celebrity Comments Off on India’s Most Wanted: Janhvi Kapoor is all praises for brother Arjun’s honest sincere performance in the film | Bollywood Life
India