“At the end of each episode, it would be like, ‘Er, are you around next week?'” he recalls. “That was when nobody knew how the show would be received or exactly how it would work out. But about a series-and-a-half in, I became a regular.” Seventeen years later, he has appeared in every episode except the pilot, and is still there, alongside host Dara Ó Briain, starring in the last ever season, which has just kicked off on BBC Two.

“It’s very unusual for a TV show like Mock The Week to last for 17 years,” he says.

“I feel very proud that we’ve gone on that long. It’s a kind of pride mixed with sadness that it’s ending, I suppose.

“Dara has said that the news is so ridiculous these days, it doesn’t need mocking but I think that was tongue-in-cheek.

“Nothing is ever too silly to satirise. I also think one of the reasons Mock The Week lasted so long is that it’s sort of about the news but it’s also kind of not.

“It’s a real mixture – the jokes in the stand-up bit, the news at the beginning and then the ‘things that you’d like to see’ at the end. But if you got all your news from it, you wouldn’t really be terribly well informed.” 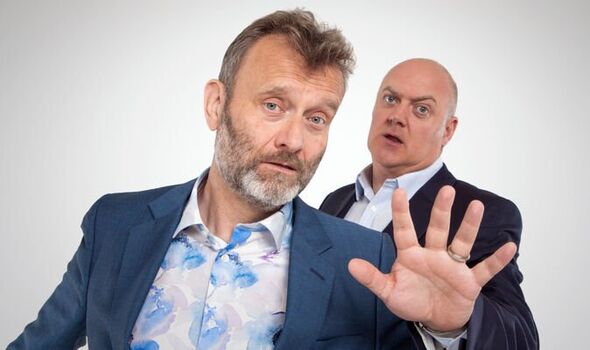 Over 17 years, there must have been some stand-out moments for the star, who first found fame alongside Rob Newman, David Baddiel and Steve Punt with The Mary Whitehouse Experience in the early 90s.

“It’s the slightly silly stuff I remember the most,” he laughs. “One episode was totally dominated by a fly which happened to be buzzing around the studio and which landed on my head at one point. It was a bit like a scene from a Spaghetti Western but I managed to catch it eventually.

“Then there was an episode we did in the year that Andy Murray won Wimbledon and he came into the studio because he was a big fan of the show. But also I’m really proud of the huge array of younger comics who have come through Mock The Week and gone on to have great careers.”

Among those who’ve made their mark on the show over the years were Jo Brand, John Bishop, Jack Whitehall and Chris Addison.

Many comedians have complained about the constraints put upon comedy by the cancel culture, but not Hugh.

“I haven’t found it that difficult yet,” he says. “I don’t think Mock The Week has, either.

“I can see it’s an issue but not one that’s particularly affected me. Some people say that starting out as a comedian is more difficult today, rather than when I started in the 1980s but in some ways it’s easier.

“At the beginning of my career, there were maybe two or three stand-up comedy venues in London. But now there are venues all over the country.

“Today, going out to watch stand-up has become a very normal part of our culture. People go to comedy clubs in the same way they might go to see a band, for instance.

“This is a really kind of recent phenomenon. Plus, there are stand-up shows on TV. I think the art of comedy is very healthy. People need to laugh – that’s the thing.”

And with that in mind, Hugh, 60, would love the opportunity to revisit another of his greatest TV hits, the family sit-com Outnumbered, which ended with a Christmas special in 2016 after five series made between 2007 and 2014.

Hugh played history-teacher dad Pete Brockman, whose attempts with wife Sue to instil a little order into the lives of their three too-clever-by-half children invariably ended in failure and embarrassment.

And he would leap at the chance to make a sequel. “I would really love it,” he says. “I don’t see why we shouldn’t. I mean, kids don’t leave home these days until they’re about 35, do they?

“Imagine the three ‘children’ still being around and driving Pete and Sue mad.

“Or it could be that Jake, Ben and Karen have had to come home to look after Pete and Sue in some capacity.

“Or maybe Pete and Sue have become grandparents. There are a lot of possibilities. I can’t see that you’d ever run out of material.

“Outnumbered was one of those sit-coms that acknowledged how difficult it is to bring up kids and what an unholy mess it is, quite often. It was one of my favourite-ever jobs.”

No wonder. Hilarious scripts and characters, and cringey-but-oh-so-recognisable scenarios aside, life imitated art when Hugh and Claire Skinner, who played his on-screen spouse, Sue, became an item in 2017, both having earlier split from their previous partners.

Neither has spoken much about their relationship although Hugh says that they are “very, very happy” together.

Do the couple stay in touch with their telly offspring, played so brilliantly by Tyger Drew-Honey, Daniel Roche and Ramona Marquez.

“Now and again,” Hugh smiles. “At events and things like that. But they’re all at different stages in life and, practically speaking, it probably wouldn’t be that easy to get us back together.”

He started out doing stand-up with his comedy partner Steve Punt, and then worked as an impressionist, doing voices for the satirical puppet show Spitting Image. So which comics make Hugh laugh? “That’s a bit like making me to choose a favourite child,” he says.

“But of all the people we’ve had on Mock The Week, Romesh Ranganathan has always made me laugh out loud, also James Acaster and Josh Widdicombe.

“Personally, I was inspired by Morecambe And Wise when I was younger. I mean, that’s all there was on the telly! They were just fantastically good. And also The Two Ronnies.

“In a sense, I’ve always regarded Ronnie Barker as my inspiration because I’ve always tried to go across the two worlds of sitcom and straightforward drama.

“When I saw Porridge, I remember not being able to believe that the character of Fletcher was the same person as the see chubby, smiley Ronnie who sat behind a desk with the other Ronnie on the TV on Saturday nights. He was a total inspiration.”

And it clearly worked. Hugh has acted in everything from Midsomer Murders’ cosy crime capers to mainstream hits such as Not Going Out, alongside Lee Mack and Sally Bretton, and edgier comedies such as Fleabag. “I love being able to be myself as a comic while also acting in comedy dramas and sitcoms,” he says.

“Perversely, my favourite thing is always what I’m not doing at the time. But it’s a nice situation to be in where you can cover all sorts of things.”

Including, recently, documentaries. His “weird and eclectic” style means he’s currently filming the latest series of The Great British Dig: History In Your Back Garden for Channel Four.

“Along with three archaeological experts, in each episode I arrive in a local community somewhere in Britain, and knock on people’s doors asking if we can dig in their gardens,” he smiles.

“I studied historical geography at university so I hope it comes across that I know a bit about what I’m talking about!”