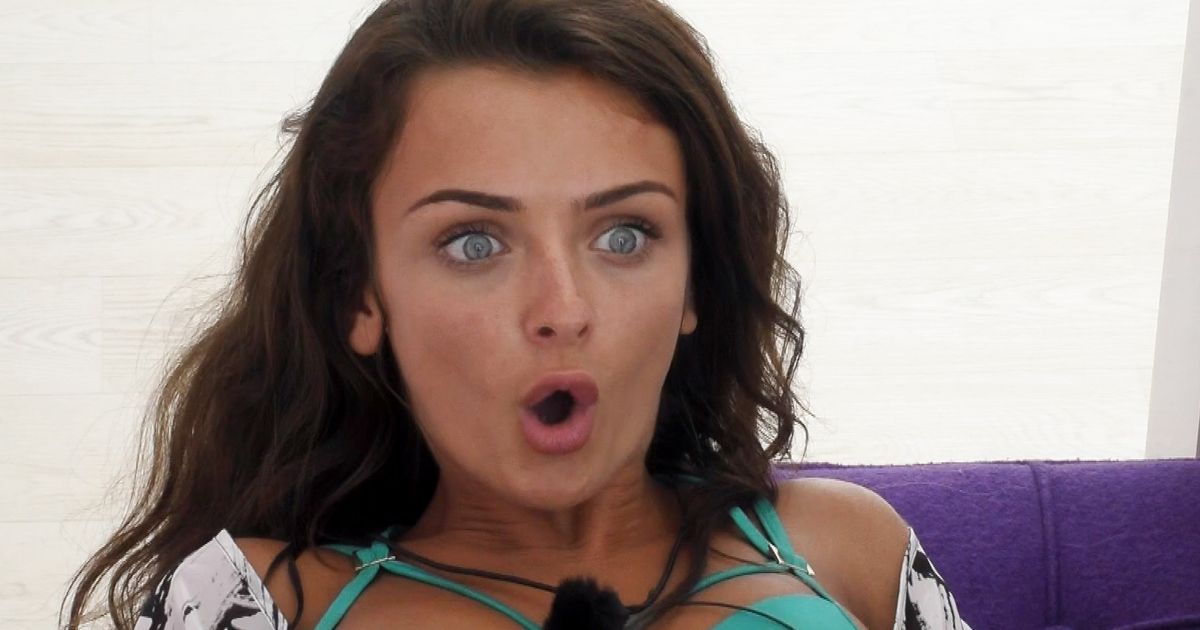 It's water-bottles at the ready with less than two weeks to go until Love Island 2019 lands.

Now in its fifth year, the ITV2 series will see a slew of sexy folk arrive in the villa hoping for a summer filled with flirting, tanning and lounging by the pool. And possibly even some love thrown in.

But so much can change in just the space of a few weeks.

Some have met The One, others have landed the career of their dreams. There have been rows, brawls and even contestants getting booted out.

The islander – who claimed to have a past romance with rapper Tyga – was immediately ejected from the ITV dating show after getting into a physical altercation with fellow islander Kady over a misunderstanding over some spilled wine.

She had only just entered the island after a surprise date with Kady's match Scott Thomas and was getting to know the other girls when Kady accidentally spilled some of her wine onto Malia's legs and feet.

“Did you do that deliberately?” she asked before standing up and telling Kady, “If you wanna speak to me, just come in there. You don’t do that with me, not at all.”

Kady then stood up and shouted at Malia: “I swear to God, if you want to get rowdy…that’s a f**king joke. Do you honestly think I’d waste my wine over you? It was a f**king accident.”

Malia replied: “Shut up you b**ch. Who the f**k do you think you are?” before lunging towards Kady.

At which point security stepped in and she was thrown out.

And the beef lives on with Malia getting nasty when Kady responded "who?" when a fan asked her about Malia on Twitter.

"Oi u dumb little b**** do not sit there & try cuss me out on your instastory you low life," Malia raged.

"You don’t know me & I hope u never bump into me again, u already snaked me once.

"U desperate little beg, ur neighbour even emailed me coz they hate you, giving me ur address."

Kady, 23, sniped back, "Shut your noise hun the footies on."

Jon got engaged to glamour model Hannah Elizabeth in the first series but they split soon after coming third.

He went on to score a permanent role in TOWIE, where he embarked on a now defunct relationship with Love Island 2017 star Chloe Crowhurst.

And he's not the only islander to have moved across to the ITVBe show, with Nathan Massey, Olivia Attwood and Kady McDermott all making appearances, while Sam Gowland joined Geordie Shore.

Cara and Nathan were love's young dream when they hooked-up on series two of Love Island .

They were arguably the strongest couple in the villa (had a few wobbles – nothing major) and were destined to walk away with the £50,000 cash prize, which they did.

Cara even emerged from the show telling fans: "We will not let you down. We're going to get married and we're going to have babies."

Then, in April, they announced a shock split. And a bigger shock followed just three weeks later: Cara was pregnant .

She told OK magazine they hadn't been trying for a baby and had broken up around two weeks after finding out she was expecting.

Enter little Freddie-George on December 13 2017, followed by a reunion and a proposal from Nathan at the Love Island villa in July 2018.

Chris spent his time in the villa arguing with girlfriend Olivia Attwood, and the fights only continued in their TV series, Chris and Olivia: Crackin’ On.

After their messy break-up was broadcast to millions, Olivia went back to her ex, footballer Bradley Dack.

Meanwhile, Chris found love with a pop superstar in the form of Little Mix's Jesy Nelson.

The cat was out the bag when they were spotted snogging in a kebab shop in February, and they're still going strong with Jesy regularly sharing cute updates on her Instagram .

Gushing about their relationship at this year's Cheltenham Festival, he said Jesy leaves him "speechless and laughing".

"She's never been to a race before, I said I'll bring her back next festival, she's rehearsing this week, very busy schedule these girls. She's great."

They were the first couple to be separated in the villa when one half was booted out, but the love is still very much alive for Jess Shears and Dom Lever who are married with a baby on the way.

Yesterday the couple shared a picture of their sonogram along with a snap of Jess' baby bump.

It's the first baby for the pair, who met in the villa in 2017 and got engaged just three months after the series ended.

They married in Mykonos, Greece in October in a intimate ceremony attended by just 22 guests.

It all kicked off when Maria accused Kady of copying her home renovation Instagram account, Project In A Village.

When Maria, 32, initially confronted Kady about claims she copied her business, Kady said: "So embarrassing. I wasn’t gonna say anything but I’ve just watched your stories and I’m cringing.

"And if you think I've copied you you should take it as a compliment. Maria no one wants to copy you. You’re no one. Grow up x."

Maria, who shared the screenshots of their conversation on Twitter , hit back by calling her "brass" and stating: "There's more to life than Instagram followers kady. I've got a stable relationship.

"Getting married next year and have a beautiful daughter. 'You're no one' with comments like that I think you’re the one who needs to grow up."

Kady then fired back: "You are so embarrassing now you're calling a 23 year old a brass. Just because you're one doesn't mean everyone is like you. Cringe bag."

And after Maria called her an "alien head" and a "clown", Kady retorted, "Your daughter is vile."

Kady subsequently apologised, insisting she made the "disgusting" comment because she wanted to hurt Maria as much as she'd hurt her.

"I am deeply sorry to Maria, her partner and of course gorgeous Evie. I did NOT mean what I said. I was massively upset by Maria's comments to me that made me feel SO upset beyond words and a degrade to my character, I then wanted to hurt her where it hurt too so I reacted irrationally and badly," she said,

"It was a disgusting comment stupidly said in a split second of anger, I instantly regretted it and deleted the comment straight away but sadly the damage was already done."

The 23 year old was stripped of her Miss Great Britain title after having sex with islander Alex Bowen, 26.

"I was a naive 20-year-old. I’d gone on Love Island to try to open new doors in my career and meet a boyfriend but I was the only one who wasn’t coupled off. In the communal bedrooms, everyone was having sex around me," she told Mail Online, revealing her regrets.

"I felt so lonely and rejected. On the day it happened, I’d been voted the least attractive and most boring out of all the women (by the other housemates) and was then given the task of choosing someone to go on a date with," she explained.

She lost her Miss GB title the next day and left the day after when her mum was admitted to hospital.

And as soon as she returned to her hometown of Hull, East Yorkshire, her mental health began to plumet.

"I could not stop thinking about Love Island. It really hit me, what I’d done, and I felt so ashamed. I felt I’d let everyone down, like I could never make anyone proud of me again. I’d have nightmares and panic attacks. I didn’t care what happened to me," she said.

She eventually saw a psychiatrist and was prescribed anti-depressants.

Mike was found hanged in a park in Edmonton, North London, at 9.30am on Saturday, March 16 just days after the death of his beloved grandmother.

The 26-year-old professional footballer had vowed not to be a "villian" when he entered the show in week two but quickly clashed with Chris Hughes after he took the latter's love interest, Olivia Attwood , on a date.

A row with Chris ensued and he was branded Muggy Mike – a name which he hated.

"I think people take it too seriously and going, 'Oh I'm this vile person', because I'm not,'' he told Now TV.

"I’m not a nasty person. I admit, I watched it back the other day and I cringed.

"I did watch it and of course I could have been more of a gent. At the end of the day, it’s a TV show."

After his death, co-star Montana Brown said he'd been struggling to adapt to life in the spotlight.

"I think the stress really got to him, and he kind of thought this fame wasn't what it was cracked up to be, where do I go now?" she said.

His aunt Francesca Goldsmid later revealed he'd been, "suffering from poor mental health – a dark depression that he kept very well hidden from even his closest friends and family."

She continued: "So on the 16th March, overwhelmed and exhausted by his private battle with depression, he made the tragic decision to give up the fight by ending his own life."

Sophie, 32, hung herself at her parent's home after consuming a cocktail of cocaine and alcohol.

She'd been on anti-depressants since 2013 and claimed the show exacerbated her illness.

In August 2016 – just weeks after she left the villa – Sophie was asked on Twitter by a fan if she'd ever want to go back.

"God, I don't know. It was the most stressed/anxious/f***ed up I've ever been in my life!" she replied frankly.

Another asked: "Would you recommend applying for Love Island ?"

She replied: "Not if you suffer from anxiety or depression. Its a VERY testing environment where a lot goes on that you don't see."

05/21/2019 Celebrity Comments Off on How Love Island changed lives for the good, the bad and the tragic
India