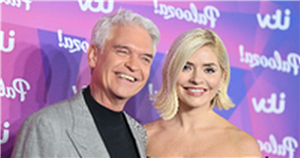 For the first time since they began hosting together on ITV's This Morning, Holly Willoughby has reportedly out-earned her co-host, Phillip Schofield.

According to reports, figures published by the 40 year old's company Roxy Media Ltd reveal she took home £1,373,694 in twelve months ending in February 2021.

In comparison, 59 year old Phillip, who recently enjoyed a night out with his wife Stephanie, has earned £789,542 in the same period, The Sun claims.

According to figures published by the blonde bombshell's media firm, she is said to have paid £261,002 in tax during the year, while Phil's company Fistral Productions paid £150,013. The publication claims that Holly raked in an eye-watering £5million through her company in the last three years.

Following the deduction of costs and expansion, she reportedly took home £5million, or £32,000 a week.

Holly also earns £600,000 a year thanks to her hosting roles on Dancing On Ice and This Morning, the latter of which she has reportedly signed a bumper deal to host for another two years.

The star also rakes in money from deals with brands such as M&S and Dunhelm. She even charges around £25,000 for speaking at event.

In October, Holly launched her own lifestyle brand, Wylde Moon. The gorgeous blonde's first product drop featured two candles and a reed diffuser, with prices starting from £40 for a single wick candle and three-wick candles costing £65.

While Holly is every inch the showbiz titan and successful businesswoman, she can also relate to everyday viewers thanks to her love for high-street clothing brands.

Holly also melted the hearts of This Morning viewers as she recently introduced her new dog to the show.

The pooch had no issues with stage fright when he met the nation as he just laid on the sofa, paying no attention to the crew or cameras. For the big reveal, Holly said: "Well, we’ve got a very special visitor here in the studio today, I’m delighted to introduce you to the newest member of my family – this is Bailey, who has sort of fallen asleep!”

The newest addition to her family seems to be playing havoc with her sleep schedule.

During the episode, when discussing the hardship of toilet training, she said: “Overnight is a little bit tricky; I normally wake up to a little present in the morning, which is fine.”

For more I'm A Celebrity updates, sign up for OK!'s daily newsletter here.