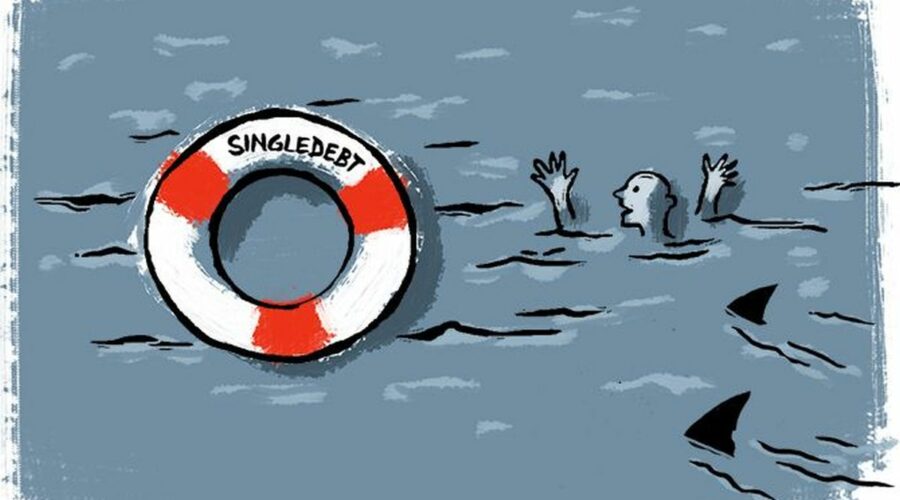 If your total EMI payments exceed 35-40 per cent of your monthly income, use these strategies to avoid a Squid Game like debt trap, suggests Bindisha Sarang.

Squid Game, a South Korean show on Netflix that is currently topping the popularity charts, is about a group of people trapped in debt who enter a series of survival games.

Thankfully, in real life, you don’t need to play Squid Games to get out of a debt crisis.

Time-tested financial strategies are enough to see you through.

Under the debt consolidation strategy, you take a fresh loan to clear all your existing liabilities.

“Typically, debt consolidation allows you to combine multiple small debts into one. This loan may come with more favourable repayment terms, such as a lower interest rate and affordable EMIs,” sats Adhil Shetty, CEO, Bankbazaar. “It also helps you keep tabs on your overall debt and simplifies repayment as fewer payments have to be tracked.”

A debt consolidation loan comes with a debt agreement, which stipulates that the loan amount can be used only to repay existing loans and that the loans would be closed within a fixed period, without delays.

It may also restrict you from borrowing further during the consolidation period.

“It is only possible to consolidate debts that are not tied to a particular asset. Unsecured loans like credit card dues, personal loan, and education loan can be consolidated,” says V Swaminathan, CEO, Andromedia and Apnapaisa .

Consolidating your debt can also improve your credit score.

“The repayment of revolving credit can help you reduce the utilisation rate on your credit card below 30 per cent,” says Swaminathan. “Consistent, on-time payments and overall debt reduction will also improve your credit rating.”

This is the strategy that most financial planners and debt counsellors swear by.

Rank all your loans by interest rate — from the most to the least expensive — and knock off the most expensive one first.

Raj Khosla, managing director, MyMoneyMantra says, “Start with credit card debt, which is always the most expensive, followed by unsecured debt, like a personal loan. Getting rid of the most expensive debt first is also a cost-effective approach.”

First, make the minimum payment on all loans to avoid a default.

Once you have done that, use any surplus you have to pre-pay a part of the debt that carries the highest interest rate.

Once you have paid off that one, move to the one with the next highest interest rate, and so on.

This method also helps you pay off your dues faster.

Here, you pay off your debt in the order of smallest to largest balance, irrespective of interest rate.

Make the minimum payment on all your loans, then use your surplus money to pay off your smallest debt first.

When that is paid, move to the next smallest, and so on.

M Barve, founder, MB Wealth Financial Solutions says, “This method boosts confidence. There is a positive psychological impact when you knock off your first debt, even if it is small.”

In 2016, researchers for the Harvard Business Review found that the snowball method is actually the most effective.

Paying down the account with the smallest balance tends to have a powerful effect on people’s sense of progress, and they feel motivated to stay on track.

There’s no doubt that it’s a more expensive approach to tackling debt, and takes longer, but it’s the most successful way.

However, certain loans are subject to prepayment charges, and you should consider this before making an early payment.

If your total EMI payments exceed 35-40 per cent of your monthly income, use these strategies to avoid a Squid Game like debt trap.