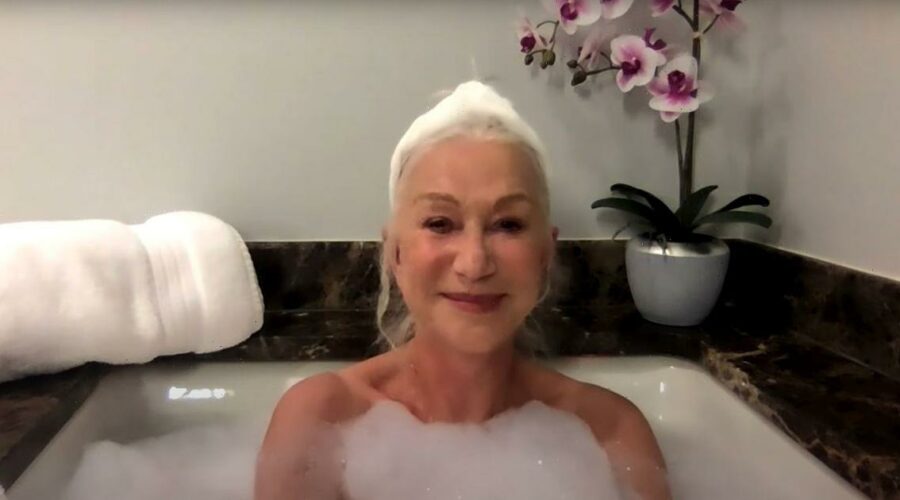 Dame Helen Mirren stripped completely naked for her latest television appearance, becoming the first person to do an interview on the Tonight Show from the bath.

The 75 year old spoke to host Jimmy Fallon about her latest movie Fast and Furious 9, but playfully told the 46 year old to hurry up with his questions as she was "running out of bubbles".

She was filmed from the tub with a mountain of foam protecting her modesty as she wrapped her hair up with a white tie.

Jimmy told the Prime Suspect actress: "You might be the first guest ever to be in the bathtub on the Tonight Show."

Helen replied: "That's what's so brilliant about Zoom. I was thinking, you know: 'Why not be in the place you love to sit and chat to people?' I love to chat to my husband while sitting in the bath, so why not do it to the whole of America?"

When she signalled that her bubbles were disappearing, she managed to throw in a plug for her latest flick, telling Jimmy to do the interview "fast and furious".

Discussing the latest instalment of the movie franchise, in which Helen plays criminal mastermind Magdalene Shaw, nicknamed Queenie, the actress said she "begged, moaned and even cried a little bit" to Vin Diesel to let her star.

Helen went on to say the nickname for the character came from one of her own aunts, who came from a "big East End family with 14 kids."

The star explained: "It was a very old London family and I had an Auntie Queenie. It's a proper East End name Queenie so I thought that would be a good name for her to have."

Helen first played the role in The Fate of the Furious in 2017, reprising it in spin-off Hobbs & Shaw in 2019.

However, this movie is the first time she has been allowed to get behind a car in the role.

She said of the moment: "I finally did it, yes! And what a car! And what a drive, down The Mall in London! It was the coolest thing ever."