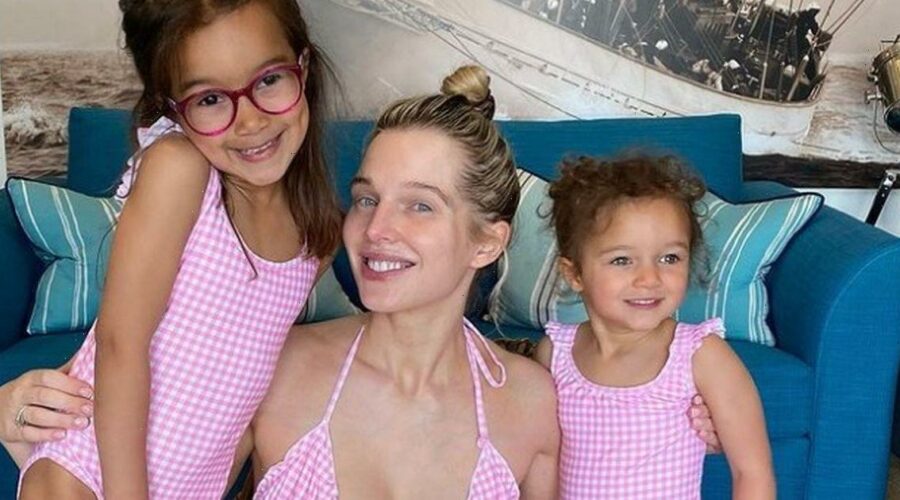 Former Coronation Street actress Helen, 30, was targeted by trolls on Instagram as she posed alongside her daughters Matilda, five, and two year old Delilah in matching swimwear.

Actress Helen gave birth to her son Charlie, who she shares with fiancé Scott Sinclair, at the end of March – eight weeks before she shared the snap.

Mum of three Helen, who discovered she was pregnant days after talks for her to return to Corrie, proudly shared the sweet photo with her 1million followers to promote her clothing brand's swimwear.

Many commented on the snap to compliment Helen on her figure.

One asked: "How is it even possible to look that amazing" followed by a high five emoji.

While another gushed: "You look amazing" followed by a heart eye emoji. And a third added: "You look incredible" next to a flame emoji.

But, some chose to lash out at her bikini body in the comments, one writing: "Did you not give birth just 2days ago lol".

While another quizzed: "Is this recent?xx". Helen is said to have felt "hurt" by the odd nasty comment from trolls, who body-shamed her postpartum physique, according to an insider.

A source told new!: "Criticism is hard for Helen as she's openly admitted to being insecure and is very self-aware.

"The photo was a happy moment with her girls and she did feel content in her body.

"She got a lot of really lovely comments but the negative comments from mummy-shamers still crept in and they do hurt."

The insider added that Helen didn't post the snap to "brag" about her body, but was "embracing" the body that gave her her three kids.

Helen, who recently said she's treasuring every second of her baby bubble, previously revealed she isn't rushing to return to exercise after welcoming son Charlie.

Helen opened up as she shared a montage video of her pregnancy and post-partum body on her Instagram page.

In the caption of the video, posted at the beginning on May, Helen explained: "Carrying a baby is such a miracle I haven’t really done any exercise since having Charlie apart from my pelvic floor exercises and enjoying walks with the baby carrier or pram and obviously running around after the two girls.

"My body has changed with each baby. My boobs have changed a lot with nursing each. The skin on my stomach has changed but I feel so lucky to able to have carried my babies."