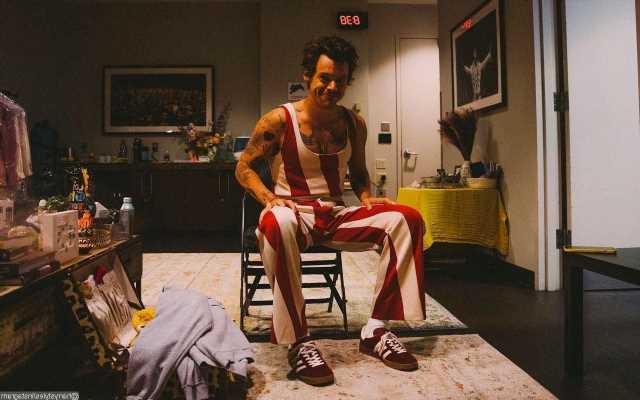 The musician/actor lands in hot water over his comments about his new film ‘My Policeman’, in which he plays a homosexual police officer hiding his sexuality.

AceShowbiz –Harry Styles is giving his honest opinion on gay lovemaking in films, but critics are not feeling it. The former One Direction member, who often speaks out for queer, has landed in hot water after he wished for more “tender” sex scenes in gay films.

The 28-year-old musician/actor has been slammed on social media after criticizing his new film “My Policeman“, in which he plays a homosexual police officer hiding his sexuality in the 1950s. Speaking to Rolling Stone, he said, “So much of gay sex in film is two guys going at it, and it kind of removes the tenderness from it.”

Detailing his refusal to conform to a sexuality label and discussing his journey to “figuring out” his sexuality, Harry, who is currently dating Olivia Wilde, said, “I would imagine, some people who watch it who were very much alive during this time when it was illegal to be gay.” The “Don’t Worry Darling” actor also noted that “My Policeman” director Michael Grandage “wanted to show that [the scenes are] tender and loving and sensitive.”

Upon learning of his comment, critics and fans took to Twitter to slam Harry for “speaking for queer people while refusing to claim the community.” One person wrote, “A straight man thinking that he ate for say that, queer people don’t need him and he better stop speaking for us. He’s just happy ’cause he stole queer culture for his benefits and fame, period,” adding, “If he doesn’t want to label himself idc but he shouldn’t be giving his opinions about a community he doesn’t even want to claim.”

“Harry Styles codifying queer movies as ‘So much of gay sex in film is two guys going at it, and it kind of removes the tenderness from it’ is crazy to me cause MOST queer films are about tenderness, sadness and longing,” another Twitter user opined. “Most sex scenes are suggested or nonexistent.”

Someone chimed in, “‘ah yes here we have harry styles who is most likely a cis straight man giving his unwanted opinion on gay sex what a good day today.” Another posted a shocked-looking man with a caption that read, “harry styles when he finds out gay men actually have sex and don’t just strut around the stage in ugly rompers.”

More recently, Harry was hit with queerbaiting accusations. Addressing the issue, the “Harry’s House” star said, “Sometimes people say, ‘You’ve only publicly been with women,’ and I don’t think I’ve publicly been with anyone. If someone takes a picture of you with someone, it doesn’t mean you’re choosing to have a pub.”