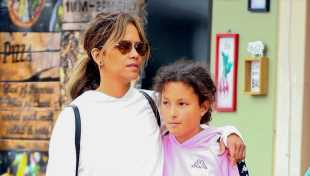 Well this is a treat! We rarely see Halle Berry with her daughter Nahla, and in new photos the 11-year-old has grown so much that she is nearly as tall as her mom as they strolled in LA together.

Where has the time gone? It seems like just yesterday that Halle Berry‘s daughter Nahla was still a little girl but in new pics she’s had a serious growth spurt. The 11-year-old’s father is former male model Gabriel Aubrey and apparently she’s inherited his height. Mother and daughter were photographed walking down Sunset Boulevard in West Hollywood on June 1 and Nahla’s already past her 5 foot 5 inch mom’s shoulders. Halle had a protective arm around her first-born and Nahla returned the affection putting her arm around her mom in return. Clearly these two have a very loving bond.

Halle met Gabriel, 42, in 2005 while doing a fashion shoot for Versace. They had an immediate connection and began dating that same year. In 2008 they welcomed Nahla — the first child for both of them — but broke up in 2010. Halle went on to fall in love with French actor Olivier Martinez, 53, while they filmed the 2012 thriller Dark Tide. They married the following year and welcomed their son Maceo, who is now 5-years-old before splitting in 2015.

While Halle is private when it comes to her children, she is highly public about her diet and fitness regimen, especially with her Fitness Fridays alongside her personal trainer Peter Lee Thomas. She shares new workouts each week on Instagram that have helped keep her body tighter and more fit that ever even though she’s 52. We’d love to see more pics of Halle’s beautiful children on her social media, but it’s understandable that she prefers to keep her kids out of the spotlight.

06/02/2019 Celebrity Comments Off on Halle Berry’s Daughter Nahla, 11, Is Almost As Tall As Her Mom In Sweet Weekend Outing — Pic
India