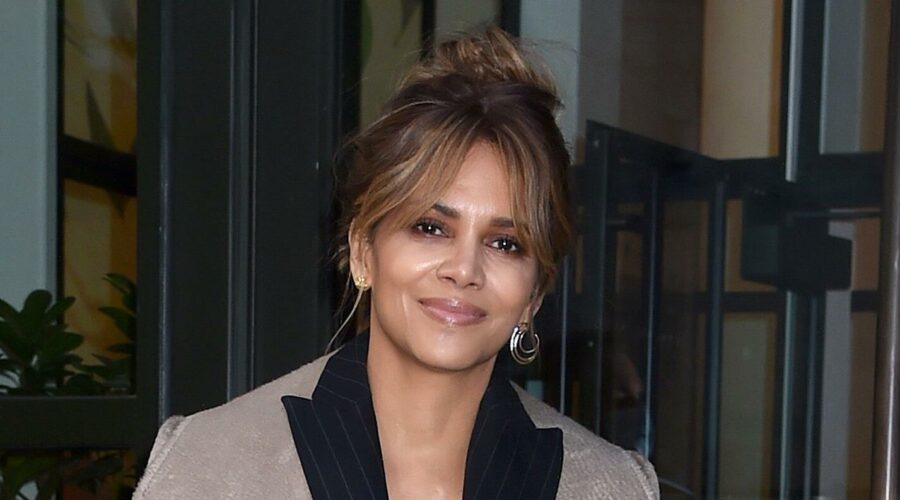 Halle Berry has been serving us with look after look this week, as she traipses around New York City promoting her new film Bruised, which premieres on Netflix this week. From sophisticated suits to sexy sheer pieces, the actress has certainly made a splash during her tour around Manhattan.

And her latest look is no exception. On Tuesday, Berry was spotted exiting her hotel, wearing yet another pantsuit that was black-and-white pinstripe. The plunging blazer was cut all the way down to her midsection, where a thick band belted off the top. She paired it with matching, wide-leg trousers that flared out over black peep-toe platforms. The lapels of the jacket were worn on the outside of a suede taupe long overcoat. She accessorized with asymmetric earrings (one a silver hoop, the other a stud), as well as a messy bun updo with face-framing curtain bangs.

The film, which stars Berry as an MMA fighter who is getting back in the ring after a dreadful loss, marks Berry's directorial debut. While doing press this week, Berry shared that she actually does not like to watch herself on screen.

"I never watch myself," she told The Sun. "Except for one time before the press junket because we have to talk about it so I have to know what's in the movie, and then at the premiere and then never again."

She added that this time around as the director, Berry was kind of forced to watch herself on repeat.

"I never go back and watch. That's the hardest thing to do. I had to discover how hard that is with my directorial debut. I had to watch myself over and over and over."