Hailey Bieber will not stand for Kanye West’s hate speech any longer.

The 25-year-old model is fed up with the Devil in a New Dress rapper! If you remember, just a couple weeks ago Ye CAME for Hailey, all because she just showed support for Vogue editor Gabriella Karefa-Johnson (you know, the one who Kanye publicly shamed for critiquing his “white lives matter” Paris fashion week show). The Rhode Beauty founder wrote to Karefa-Johnson at the time:

“My respect for you runs deep my friend! to know you is to adore you and to work with you is an honor. the most kind. the most talented. the most fun. the most chic.”

Nothing but support for someone being bullied.

But that was enough to send the 45-year-old rapper into a spiral because that’s just how insecure the supposed genius really is. He retaliated by addressing Hailey’s hubby Justin Bieber, writing:

“JUSTIN GET YOUR GIRL BEFORE I GET MAD.”

“Wait am I canceled again??? Justin please let me know”

He then personally attacked Hailey, referring to her as “nose job Hailey Baldloose,” prompting the Biebers to cut ties with him for good. Now Hailey is taking things a step further.

The beauty mogul took to her Instagram Stories on Monday to address Ye’s ongoing antisemitism, pointing out the hypocrisy of the Sunday Service founder spreading such hateful rhetoric:

“You cannot believe in God and be antisemitic. You cannot love God and support or condone hate speech. To love God is to love people. ALL people.” 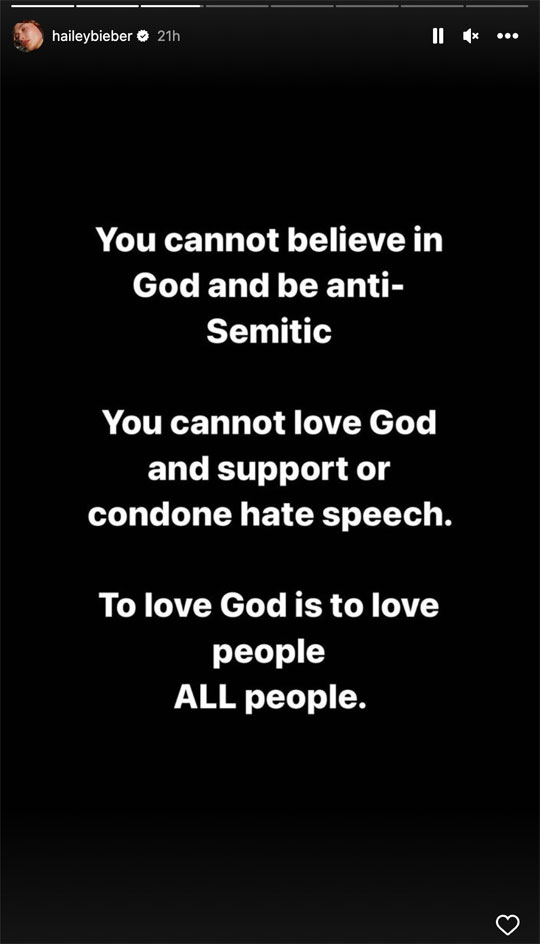 As we all know, Kanye noted earlier this month he would be going “death con 3 on Jewish people,” later doubling down during an interview on Drink Champs, spouting antisemitic tropes and conspiracies about “Jewish Zionists.” He was later given the chance to apologize while appearing on Piers Morgan Uncensored, where he was asked if he regrets his statements, to which he responded:

Enough is enough! We wholeheartedly stand by Hailey and her words, and it looks as though a lot of industry members are doing the same… He’s been dropped by CAA, Balenciaga, his trainer, his lawyer. And as of Tuesday morning, even Adidas have officially cut ties. They wrote in a statement:

“Adidas does not tolerate antisemitism and any other sort of hate speech. Ye’s recent comments and actions have been unacceptable, hateful and dangerous, and they violate the company’s values of diversity and inclusion, mutual respect and fairness.”

Kanye is just on a road we can no longer follow, and it will ultimately be up to him to change direction, if it’s not already too late. But what are your thoughts on Hailey’s comments, Perezcious readers? Let us know in the comments (below).