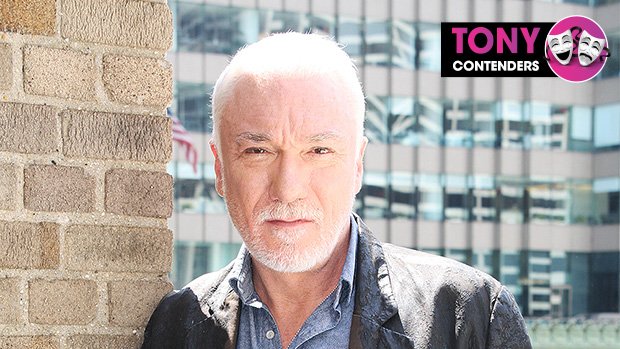 No one man should have all that power & Patrick Page proves it in his Tony nominated portrayal of Hades in one of Broadway’s hottest new shows, ‘Hadestown.’

It’s a tale as old as the Gods, themselves, that is being told on the Broadway stage at the Walter Kerr Theater every day (except Mondays), with a modern twist that can be eerily compared to our current political climate. In a Great Depression-era setting, Anais Mitchell’s 2010 album Hadestown is brought to life, telling the story of the Ancient Greek myth of Orpheus (Reeve Carney) and Eurydice (Eva Noblezada), where Orpheus must embark on a quest to rescue his wife Eurydice from the underworld. Tony nominee Patrick Page plays the sinister Hades, who seduced Eurydice to join him in the Underworld. There, Hades believes he serves as a benevolent ruler who is providing his people with a safe and wealthy land, but he is, in fact, a power-hungry, insecure man. If you recall, Hades also abducted Persephone (Amber Gray), the Goddess of nature, only allowing her to venture to Earth for half of the year, while she rules the Underworld with him for the other half.

In Hadestown, while we examine the budding and downfall of Orpheus and Eurydice, we also see the complex relationship between Hades and Persephone — specifically that Hades resorts to domination out of anxiety he will lose his love. “For me, everything I do in the play comes from my love for Persephone and my fear of losing her,” Page said in an EXCLUSIVE interview with HollywoodLife.com. “The fear overrides the love for most of the show until we finally have a moment where we find each other. That crippling anxiety and fear that one day she’s going to go up top and never come back — that’s what motivates everything I do.”

“The central question of the play is the empowerment of the individual,” Page continued. “Hades gives Orpheus the test, after he moved him. But, knowing what Hades knows about himself, that he could never walk away from Persephone without knowing she was behind him, he challenges Orpheus to pull down that wall. If he can lead her out of Hadestown, which no one has ever done before, without looking to see if she’s following, then he deserves it. But, I know he couldn’t.” However, he added, “What the show gives you is the hope that maybe you’ll be able to. Maybe, maybe this show will give you enough agency, enough sense of yourself that you can walk forward and have faith in your fellow man — that there’s someone right there with you, someone right behind you.”

During one of Page’s featured and most talked-about numbers, “That’s Why We Build A Wall,” the audience can’t help but be overwhelmed with a sense of PTSD and fear,  especially following the language that the President has spewed about walls since his campaign in 2015. “Anais wrote this role and this song when Donald Trump was still a game show host, pretending to be a billionaire. She’s prophetic but I hope people don’t lose sight of the bigger issues,” Page said of the song, that includes the lyric, “How does the wall keep us free?/The wall keeps out the enemy.” “If anyone in the audience thinks I’m singing about a wall at the southern border of the United States they’ve missed the point of the song,” he continued. “The song is way larger than that. People have tried to divide other people with walls and with fear from the very beginning of time.”

While Page urges attendees to search for themes deeper than the President’s Twitter feed, he did admit that some people get up and walk out of the show because they are Trump supporters. “I want to stop the song and say, ‘Hey, I’m not singing about your guy. Your guy took a divisive symbol and he’s using it to frighten you and to get your vote.’ It’s a very concrete image that’s easy for people to grasp.”

You can see Hadestown at the Walter Kerr Theater, on Broadway now.

05/21/2019 Celebrity Comments Off on ‘Hadestown’: Patrick Page Takes Us To Hell & Back While Demonstrating The Dangers Of Too Much Power
India