TOWIE star Gemma Collins is currently living it up across the pond as she films her new reality show Diva Forever.

Feisty Essex lady Gem was sure to find time for some sun bathing though, sharing a saucy snap as she reclined in the LA heat.

Baring her entire bottom in a tiny thong bottomed swimsuit, the self-confessed diva left little to her fan’s imaginations.

Making sure she got full sun exposure as she pointed her booty in the direction of the camera, 38-year-old Gemma confidently posed by the pool. 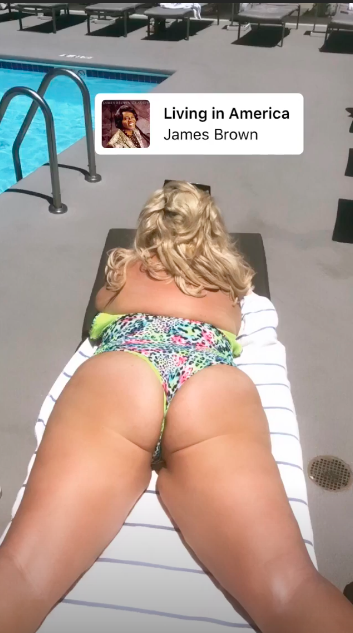 Having taken on a new fitness and diet regime, Gemma recently declared on Instagram she had lost a significant amount of weight.

During a consultation with Kardashian surgeon Dr Ourian last week, Gem was heard telling him: ‘I need this fat sucked out of my face pronto.

‘I’ve just lost two and a half stone but the face don’t get any thinner.’

The Dancing On Ice contestant certainly hasn’t let her trip to the states derail her new healthy lifestyle, something she proved when she shared a snippet of an intense looking workout.

Uploading a video as she sprinted up hill in California’s Canyon Park, GC can be seen breaking a sweat in a bright yellow t-shirt paired with black leggings.

In the sporty footage the former Romford car-dealer can be heard saying: ‘Nobody’s going to get up this Canyon faster than the GC,’ while personal trainer and former TOWIE castmate Charlie King cheers her on, shouting: ‘Go girl!’

Beside the post, Gemma added a super motivational fitness update, penning: ‘RUNYON CANYON ?‍♀️……. To get to the TOP you can never GIVE UP ….. my fitness levels increase daily thank you @charlie_king85#keeppushingyourself.’

Plenty of Gem’s loyal fans were quick to praise her achievement, with one commenting: ‘Smashing ittt ??,’ and another chipping in to say: ‘Monday motivation.’