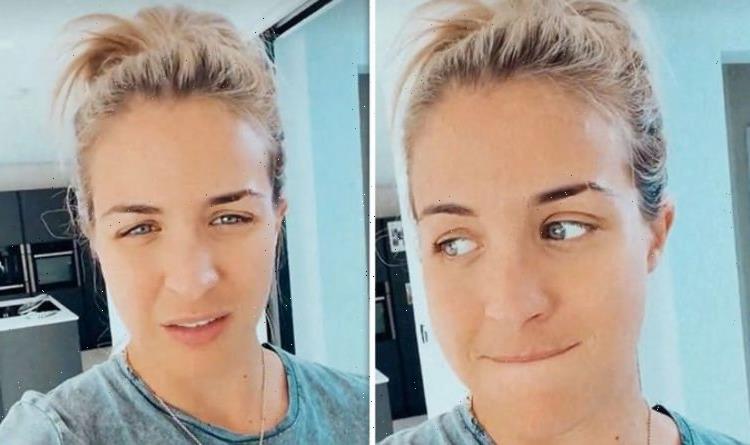 Former Strictly Come Dancing star Gemma Atkinson was left taken aback after receiving a bombardment of unwanted pictures. The ex-Hollyoaks actress explained she was forced to block a social media user who sent her photos of their private parts yesterday.

The 36-year-old shared her delight in a cheeky rant after blocking the person in question as she spoke of a new discovery.

Taking to her Instagram stories, the mum-of-one confessed she often gets “weirdos” sending her unwanted pictures.

“I blocked someone on here today… some weirdo sending me all kinds of sh**e,” Gemma explained, in view of her 1.7 million followers.

The small-screen star explained the picture-sharing site gave her the option to block any future pages the social media user sets up.

She continued: “But when I blocked him it gave me the option to block his page or block any other page he sets up as well.

“So does that mean they’re checking IP addresses now? If so, bravo.”

Gemma captioned the clip: “Is this a new feature? Or one I’ve only just come across?”

In a follow-up message, the former Strictly star explained it was a positive step in the right direction.

“It’s really, really good. I blocked him and any other page he sets up basically,” she commented.

“A step in the right direction. You do get some weirdos.”

The radio broadcaster then shared a clip of her food she was about to tuck into.

Gemma regularly updates fans about her day-day-to life on the social media platform.

Meanwhile, the former Emmerdale star showcased a new look on the picture-sharing site as she revealed her blonde locks had been chopped off into a bob.

The actress and presenter gave fans a chance to see her makeover at the weekend as she enjoyed a girls’ night out.

Speaking directly to the camera, the star said: “Told Emma [her hairdresser] I was worried about my roots coming through… so we went a little bit darker. Still blonde, but caramels and fudges.”

Gemma spent the evening with pals to undoubtedly keep her mind off missing her fiancé Gorka Marquez.

The Spanish-born hunk is currently away from their home preparing for Strictly Come Dancing which returns to viewers’ screens next month.