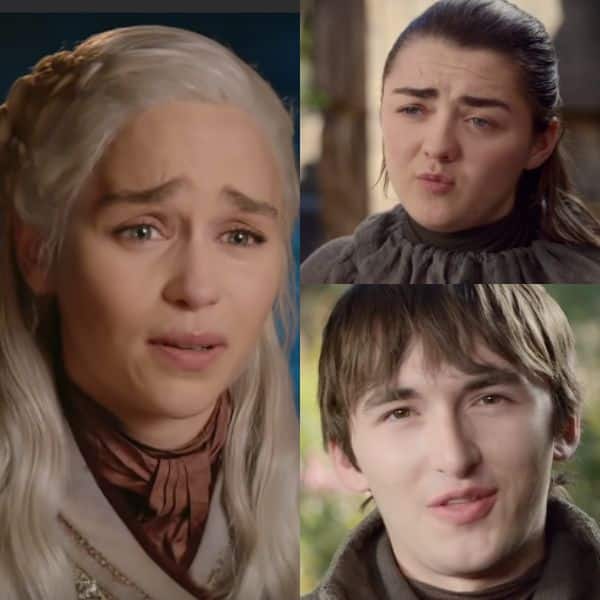 It’s all done and dusted now. The finale episode of Game of Thrones season 8 premiered just a few hours back and mind you, we are still reeling with its aftermath. The makers concluded the show on a comparatively low note and all the GOT enthusiasts were left disappointed. Tyrion resigning as the Queen’s hand after finding the bodies of Jaime and Cersei Lannister under the rubble, to Jon Snow killing Daenerys after kissing her for the last time to Bran Stark taking over the Iron Throne and therefore the seven kingdoms, the episode was quite a shocker for everyone.

So much so that the fans are yet to come to terms with the show airing its ‘last’ episode. The show which ran for 8 long years, the show which was followed, loved, hated, appreciated by many has finally breathed it’s last. But, not only us, the fans, are reeling with it but also the cast of Game Of Thrones are emotional as the series has finally met its end. In a video released by the makers on Youtube, Daenerys, Bran, Arya, Samwell, Tormund, Brienne of Tarth bid adieu to their characters while thanking fans for showering them with so much love and attention.

Emilia aka Khaleesi aka Mother of Dragons aka Mad Queen, became teary-eyed and said, “Thank you to all the people I don’t know. (thank you for) Allowing us to keep playing these games and keep telling these stories. The fans have like given me an identity that I didn’t have.”

Issac Hampstead Wright aka Bran Stark aka The Broken aka The King said, “To all the fans, Thank you for coming along on this extraordinary journey. It would be nothing if it weren’t for all the rumours and theories and intense discussion going on and the Game Of Thrones viewing parties.”

Game of Thrones series finale: After Starbucks coffee cup, fans are upset with another blunder in the last episode

Sophie Turner aka Sansa Stark said, “(Thank you to all the fans for) Keeping it alive when we take like year-and-half breaks.”

Maisie Williams aka Arya Stark cannot believe the number of fans the show has, she said, “There are far more fans of the show than we ever thought was possible.”

Have a look at the video here:

John Bradly aka Samwell Tarly, Kristofer Hivju aka Tormund Giantsbane, Gwendoline Christie aka Brienne of Tarth also bid adieu to their characters and thanked the fans.

Now that the show has concluded, what are your plans next? Let us know by tweeting to us @bollywood_life…

05/20/2019 Celebrity Comments Off on Game Of Thrones season 8: The cast signs off; thank fans all around the world in THIS emotional video – watch here | Bollywood Life
India