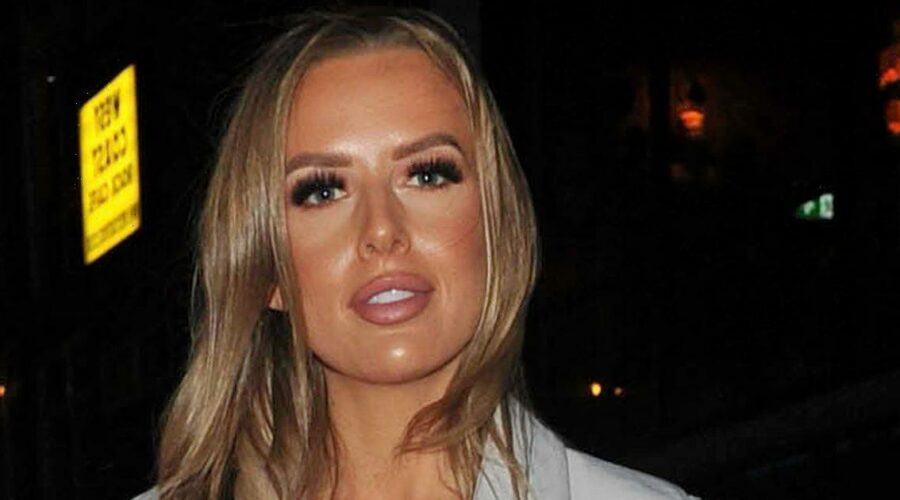 Faye Winter debuted a stunning outfit as she turned up to support boyfriend Teddy Soares for his appearance in The Real Full Monty.

The former Love Island beauty opted for a daring plunging neckline at she turned up at the The Real Full Monty in Blackpool on Wednesday, 16 November, opting for a glamorous loosely tied grey suit top and tailored trousers.

She finished the look by accessorising with a pair of fluffy heels, glittery handbag and her hair wore in her long, trademark loose waves.

Faye, 26, was in Blackpool to see the Full Monty show, which sees a series of celebrities baring all for charity, raising awareness of life-saving cancer checks. The show is set to be broadcast in a television special later this year.

Faye was also joined by sister Joanne, who looked stylish in a strapless white jumpsuit with feather trim and high heels.

After the show, she took to Instagram to gush over boyfriend Teddy, calling him an "angel".

"So we've just seen my angel doing The Fully Monty. He's done amazingly," Faye said. "I'm honestly so proud of him. It takes so much courage.

"When everyone walked on that stage… oh my god, wow. But well done Teddy, you've done amazing."

It's been a particularly busy time for Faye and Teddy who, alongside their busy post-Love Island careers, have also just moved into a new house.

The TV stars moved into their new home this month and Faye has started documenting their home renovations on a new YouTube channel.

The couple told OK! earlier this month that they are just renting at the moment, as they didn’t want to commit to buying their own home yet.

In the first video on the couple's new YouTube channel, Faye treated fans to a property tour and explains that the landlord is “very flexible” so the couple can make their own home improvements to the space that she admitted “will need some TLC.”

Speaking to OK!, the ex-Islander also shared more about what will be coming up on her new channel.

She said: "The Instagram account is gonna run alongside the YouTube channel, and we'll be covering mine and Teddy's renovation, doing some rooms on a budget, some stuff I'll be upcycling.

"It'll be a bit out of the norm of your standard home account because as you know… I know what I'm talking about!"

Stay up to date with all the latest on Faye Winter by signing up to OK!'s daily celebrity newsletter.