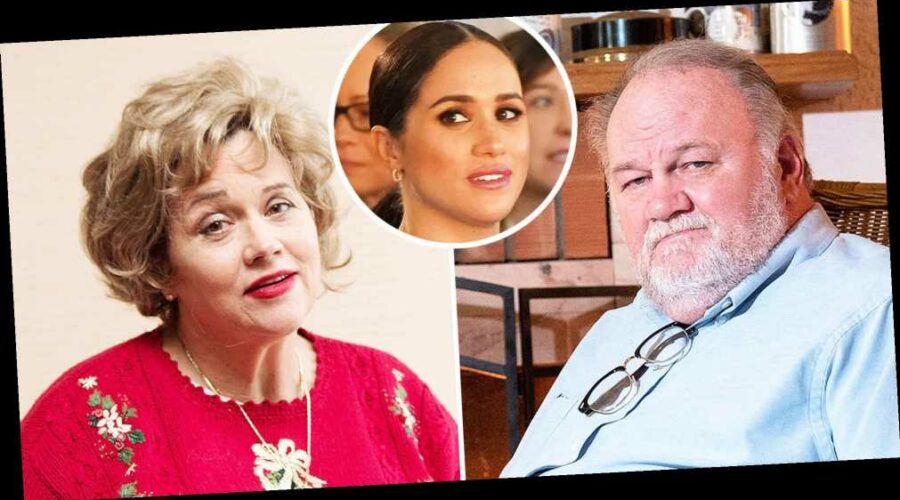 Royal mess! Meghan Markle‘s estranged father, Thomas Markle, and half-sister, Samantha Markle, have been outspoken about her since her relationship with Prince Harry started in 2016.

Most recently, Thomas and Samantha spoke out against Meghan after she addressed their regular public comments about her in an interview with CBS in March 2021. During the sit-down, the Suits alum said, “I grieve a lot. I mean, I’ve lost my father. I lost a baby. I nearly lost my name. I mean, there’s the loss of identity.”

Thomas responded in an interview with Good Morning Britain, during which he said, “She’s pretty much ghosted all of her family, on her mother’s side and my side. So, she really had no one to reach out to. She would’ve had us if she’d kept us. We all make mistakes.”

Samantha, for her part, spoke with Inside Edition about her relationship with Meghan after the former actress’ CBS tell-all. “Depression is not an excuse for treating people like dishrags and disposing of them,” she said.

Meghan did not spend much time during the CBS interview discussing her relationship with her father or half-sister. In a bonus clip from the discussion, she praised mom Doria Ragland, saying she “remained in silent dignity for four years watching me go through this,” referring to attacks from the British media, Thomas, Samantha and the public.

The former senior royal claimed she was not protected from these attacks by the palace. In fact, she accused the palace of “perpetuating falsehoods” about her and Harry, 36, citing a story about her making Duchess Kate cry ahead of her May 2018 wedding. Meghan alleged during the interview that the Duchess of Cambridge actually made her cry, adding that Kate apologized afterward but the palace didn’t set the record straight.

Thomas welcomed Samantha and son Thomas Markle Jr. during his first marriage to Roslyn Loveless, which ended in 1973. He wed Ragland in 1979, and the yoga instructor gave birth to Meghan two years later. Thomas and Ragland divorced in 1987. The Markles have been estranged from the Duchess of Sussex for years.

Keep scrolling for more of the drama between Meghan, Thomas and Samantha.

03/27/2021 Celebrity Comments Off on Everything Meghan Markle's Dad, Half-Sister Have Said About Her
TV & Movies