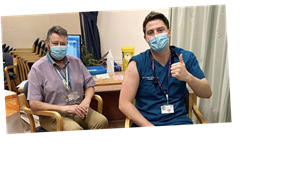 Dr Alex George has said he feels "quite emotional" after announcing he's had the coronavirus jab.

The 30 year old, who recently admitted he worried people would doubt his skills as a doctor if he shared mental health struggles, took to his Instagram feed to share the news with his 1.5million followers.

The former Love Island star posted a snap of himself in his blue scrubs with one sleeve rolled up to show a small red mark from where he got the vaccination.

Alex appeared cheery as he put a thumbs up for the camera and appeared to smile behind his blue medical face mask.

In the caption, he wrote: "I HAVE HAD THE VACCINE!! We have all been hoping for a vaccine ever since this virus appeared. Felt quite emotional having the jab, it has been a hard year!"

The reality star, who recently candidly opened up on his "tough" first Christmas after the tragic death of his brother, went on to confess he finally sees an end to the chaos that has been Covid-19.

"I am so glad there is light at the end of the tunnel," he said, before thanking a pharmacist for his help with the jab. He said: "Huge thanks to Chris, one of the hospital pharmacists, for giving me the injection and to everyone working so hard to roll this out.

"It was a quick jab then back to work for me! Full disclosure I was given a star sticker for having the vaccine and being a good boy Onwards," [sic] followed by a blue heart emoji.

It comes as Alex recently said with the new mutant variation spread of the deadly virus, things at his hospital are "pretty tough at the moment".

The former Love Island star took to Instagram to update his followers about the situation at his hospital in Lewisham in London.

Alex posted a snap of himself in full PPE gear, complete with a face mask, face shield and protective gloves.

Love Island: What are the old islanders like Rykard Jenkins and Jess Hayes up to now?

Alongside it, he wrote: "Guys things are pretty rough at the moment. I would say at least as bad as March in the hospital.

"We need to brace ourselves over the next few months and make sure we are each doing our bit."

The frontline worker took the opportunity to spread some positive energy and provide hope to his followers.

"We will get through it but at the moment it's time for us all to focus and do our best to control the spread. Big thanks to everyone as always, this isn't easy but we will beat this virus and navigate to better times."

Alex's followers were grateful for the encouragement and took to the comments section to thank him and other NHS staff.

"Thank you for all you and your colleagues are doing," one fan wrote, while another added: "Thank you for keeping it real and encouraging everyone to stay positive."

"Stay safe and keep up the amazing work," a third person commented.