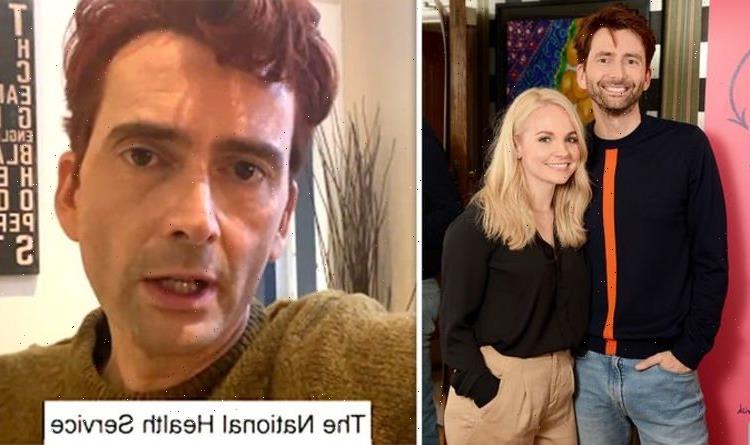 David Tennant on why he's wants to renationalise the NHS

Speaking in aid of the organisation YourNHSNeedsYou, David delivered a heartfelt plea to the British public to join their cause. In the video, the former Doctor Who actor, 50, spoke about how the NHS had saved different members of his family’s life through the years.

“The National Health Service saved my life when I was 10 and my appendix burst,” David began.

“It saved my daughter’s life when she was just a few weeks old and they brought her back from a very scary place.

“Their screening service detected my wife’s cervical cancer, and she got treatment and now she’s fine.”

“The NHS is probably the thing that makes me proudest to be British,” he continued.

“Proud, because it’s a national kindness that we all contribute together to make sure everyone is cared for.

“No matter who they are, everyone gets looked after. It’s a national selflessness.

“The fact that the NHS exists makes us all better people. We tinker with that at our peril.

“Go to yournhsneedsyou.com and see what you can do. Thank you.”

David’s wife, Georgia Tennant, retweeted the heartfelt video with a message of her own.

Georgia, 36, and David met on the set of Doctor Who, where Georgia played the Doctor’s biological daughter after an adult clone was produced from his DNA in the 2008 episode The Doctor’s Daughter.

The pair have been married since 2011 and share three daughters and two sons, including Georgia’s firstborn son Ty, whom David adopted.

In her retweet Georgia wrote: “I care so deeply about this that I approved him talking about my vaginal area.

“Please help how you can so that my sacrifice wasn’t in vain x #nhs #nhsprivatisation #ANationalKindness #YourNHSNeedsYou.”

Some of Georgia’s 120,500 Twitter followers sent in messages of support to the actress, who was diagnosed with cervical cancer in 2018.

SheRegenerated commented: “I’m thankful that you and others have NHS and are well. Especially in these times of a global pandemic, agree 100%.”

AndyBUK wrote: “The NHS saved my little girl and then cared for her several times in hospital subsequently. Thanks for sharing your family stories.”

Andie added: “I wouldn’t be here if it wasn’t for the NHS. They have saved my life 4 times. I’ve had 25 operations so far with more to come.

“I’m so grateful that I have access to the medical care I need every day and have been able to see my Son grow up.”

YourNHSNeedsYou describe on their website how “decades of academic research, and the brave campaigning of doctors and nurses, has exposed how this privatisation plot smuggled in private providers and US corporations while selling off NHS land and buildings.”

They also claim that the government’s current Health and Care Bill “is likely to be the nail in the coffin for our public health service,” going on to list five steps people can take to “build the campaign to renationalise our NHS before it’s too late.”