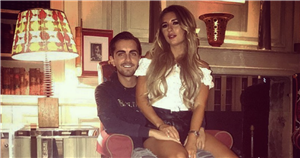 Dani Dyer has hit back at fans who have slammed her new relationship with former flame Sammy Kimmence.

The former Love Island star posted a sweet snap of her and her new man to Instagram, before being hit with a barrage of comments telling her she should have stayed with ex Jack Fincham.

“How do people move on so quickly? I’d love to know!” wrote one bemused fan.

While another added: “What u playing at? Jack is so fit”

However Dani was quick to hit back, revealing she is happier than ever and doesn’t care what people think.

She wrote: “I’m not going to delete anyone’s comments. You can all say what you want to say honestly we live in a free world.

“But I’m so f happy. I ain’t living a life to prove to people or to fake to people I am something I am not I’ve always been real [sic].”

She added: “Some people like it some people don’t. I’m focusing on number one. No time for anything no plans made it’s just happened and you can judge all you want.

“But come on I’m the real mf judge Judy.”

Dani went public with her new relationship a few weeks ago after she was spotted kissing him over the Easter bank holiday – just 20 days after announcing her split with Jack Fincham.

She has since posted several loved-up pictures with him, including one where they can be seen posing alongside her mother, Joanne.

Jack is said to be "very upset" after the photos emerged of Dani with her new man, but has vowed to "keep his head high".

While he’s kept relatively quiet, a representative for Jack told The Sun:“Jack was of course very upset – anyone would be when they see an ex with somebody else."

"He is keeping his head high and focusing on work at the moment."