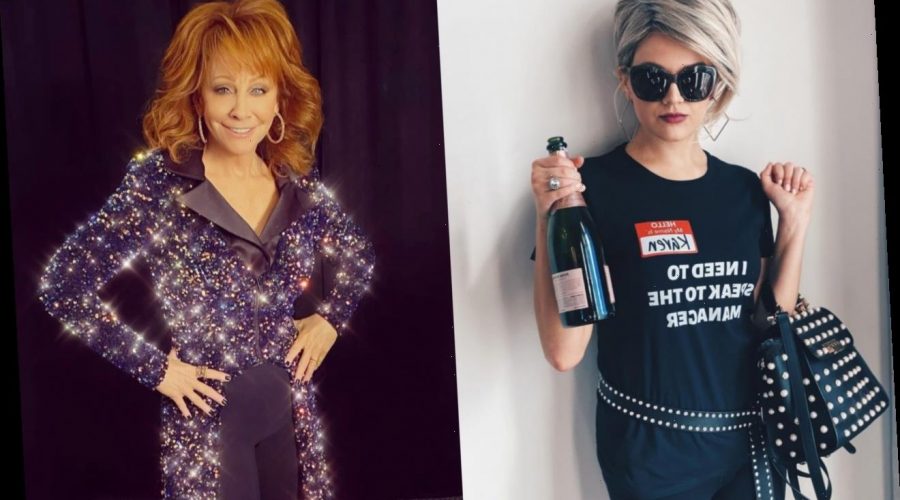 Also gracing the red carpet at the annual award-giving event, Maren Morris opts for an all-black look as she arrives in a black corset which she pairs with a long black robe.

Jon Pardi and his fiancee Summer Duncan arrived looking fierce for the night. The “Ain’t Always the Cowboy” singer donned a black blazer which featured roses embroidery. He completed the look with black pants, black shoes and matching cowboy hat. Summer, meanwhile, was beautiful in a feathery red gown.

Literally dazzling for the big night was host Reba McEntire, who opted for a navy dress with sparkling emblezzement. Adding more bling to her look, the country legend sported a pair of hoop earrings. Her co-host Darius Rucker, meanwhile, simply looked dapper in a black suit with a white shirt underneath.

Carrie Underwood and her husband, Canadian-American former professional ice hockey center Mike Fisher, were also among the stars who hit the red carpet. The Award-winning singer showed a little bit of her skin in a one sleeve asymmetric dress. Maren Morris, meanwhile, opted for an all-black look as she arrived in a black corset which she paired with a long black robe.

Also gracing the red carpet that night were Jake Owen and his girlfriend Erica Hartlein. They looked like a groom and a bride as the “Made for You” singer dressed in a black suit while Erica donned a strapless mermaid white gown. Carly Pearce also arrived in style as she donned a green emerald dress that featured a thigh-high slit in the front. As for Jimmie Allen and his pregnant fiancee Alexis Gale, they twinned in black outfits.

Soon-to-be mom Gabby Barrett also flaunted her pregnancy glow in a beautiful silver gown with cape details. As for Kelsea Ballerini, the “Homecoming Queen?” hitmaker turned heads in a red gown which had beautiful rose and leaf details.