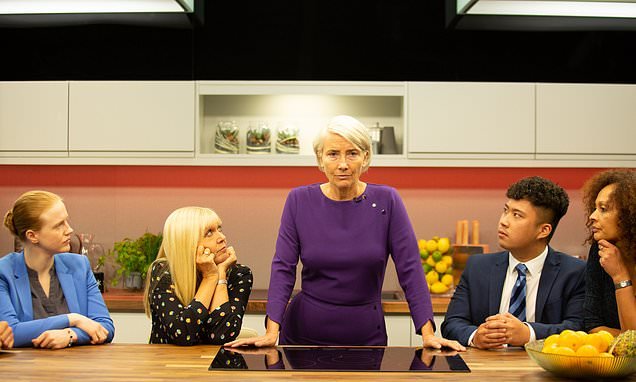 CHRISTOPHER STEVENS reviews last night’s TV: Come on Auntie, give us silliness, not this pious self-righteousness

Boy, do I want one of those! Emma Thompson brandished the ultimate must-have gadget in Years And Years (BBC1) — a pen-like device that switched off all internet devices within a 30-yard radius.

Imagine the satisfaction. Those wallies who plough down the pavement, hypnotised by their smartphones — blocked.

Morons who spend entire rail journeys yelling, ‘I can’t hear you, I’m on the train’ — cut off. Children who can’t even make eye contact over the breakfast table — reconnected to reality. 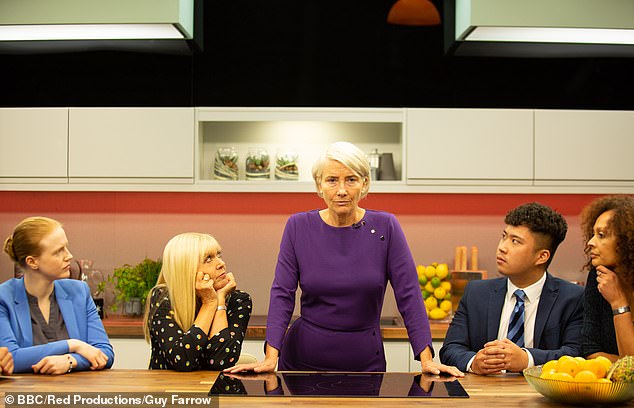 Emma Thompson, as politician Viv Rook, managed to keep her audience rapt by using a device that turned off internet connections in the area

The invention of writer Russell T. Davies, this ballpoint miracle was called the Blink and it enabled Thompson, as politician Viv Rook, to command an audience’s complete attention. Unable to tweet, record video-selfies, check Instagram or text compulsively, people actually had to listen.

All over the country, viewers were whispering: ‘I wish I could get one of those things.’

Russell’s other predictions, in this futuristic family saga, were shakier. He’s already promised an American nuclear attack on China in 2024. Now he foresaw a global banking crash, food shortages and the melting of the polar ice cap.

None of these catastrophes was remotely imaginative: he is brilliant at the quirky ideas, but lazy and hackneyed with the big ones. 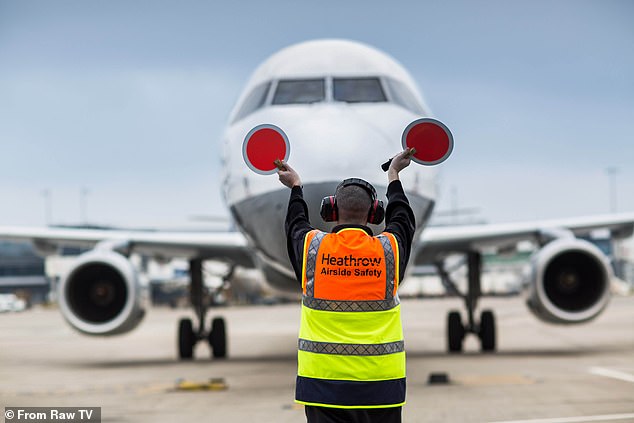 Heathrow: Britain’s Busiest Airport makes a refreshing change as it shows people actually enjoying themselves while at work

Viv Rook is the only interesting and believable character in the show. The others exist chiefly to voice right-on political opinions and tell us what we should be thinking.

Jessica Hynes, as eco-warrior Edith, came home from the atomic bomb zone to lecture her family about climate change.

Council manager Daniel (Russell Tovey), who dumped his husband last week to set up with a good-looking asylum-seeker, got very aerated about Russian intolerance of homosexuals.

Two weeks in, his boyfriend (Maxim Baldry) has been deported, while his big brother Stephen (Rory Kinnear) is homeless following the banking crash… and there are still four episodes to go.

The characters are reduced to puppets, with each big plot twist designed to torture one of them.

When it forgets to preach, Years And Years does draw you in. In one lovely, daft scene, the siblings got drunk on synthetic vodka and danced round a campfire. There was no political point to this, no heavy message. It was just fun, with a bunch of people who cared for each other. More silliness and less self-righteousness please.

The most appealing character of the evening was a real bloke with a passion for bird-watching and plane-spotting.

HARD GRAFT OF THE NIGHT:

Timothy Spall and the other jewel thieves of Hatton Garden (ITV) looked knackered after emptying those safety deposit boxes. That’s a lot of effort to waste ensuring you spend your last years behind bars.

Airside Ian, as the voice-over referred to him on Heathrow: Britain’s Busiest Airport (ITV), kept the crows and starlings away from the runways.

When he spotted something with feathers, he ran towards it with a black binliner waving in his fist. For extra impact, he cawed loudly. The birds assumed he must have captured one of their mates, and hopped it. Stroking his toothpick moustache, Ian didn’t have to say he had the best job in the world. He glowed with the satisfaction of it.

One of the pleasures of this observational documentary, now into its fifth series, is realising how much entertainment people can squeeze out of their daily toil.

If you believe telly dramas, every office is miserable and every worker a wage slave.

It was good to see the banter between the firearms officers, and the excitement of ‘customer experience manager’ Demi on sighting Hollywood sci-fi actress Sigourney Weaver at the check-in desk.

Why shouldn’t work be fun?