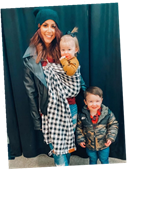 Perhaps no reality show on television has a more conflicted relationship with its viewers than Teen Mom 2.

Fans grew up with these cast members, and they’ve become invested in their personal struggles, no doubt.

At the same time, that personal investment doesn’t necessarily mean that they like the Moms in all cases.

You know what we’re talkin’ about.

When Jenelle Evans was fired, for example, the move was universally applauded by Teen Mom Nation.

Real-life plot twists such as Leah Messer joining a friggen cult or Kailyn Lowry deciding to have kid after kid with a complete loser such as Chris Lopez have left fans at a loss.

These days for viewers, it’s less like they’re rooting for relatable people with relatable problems and more like they’re eavesdropping on the lives of ultra-privileged budding Kardashians.

But one member of the cast has remained true to her humble roots, and a growing number of viewers say she’s the only thing that keeps them tuning in.

To describe the pride of South Dakota and soon-to-be mother of four as a fan favorite would be a dramatic understatement.

Chelsea is the most popular Teen Mom on social media by a wide margin, and fans have been vocal in their desire to see her star in her own series.

“I fast forward though Briana,” one person tweeted to Chelsea during this week’s episode.

“I wish a network would just give you your own show who agrees?!” another echoed.

“We need a Chelsea and Cole plus 4 reality show! Love them to bits!!’ a third chimed in.

Well, a title that references the Gosselins probably wouldn’t be the greatest idea, as that situation didn’t work out well for anyone involved … and is making disastrous headlines even now.

So will that ever actually happen?

Well, the answer is … maybe?

Chelsea is the only cast member whose star is on the rise, and that’s been the case for quite some time.

Pair that with the discouraging Teen Mom 2 ratings – which have been on the decline for years – and it’s not hard to imagine a scenario in which producers approach the DeBoers about starring in a show of their own.

We recently learned that Chelsea is pregnant with her fourth child, and she and Cole recently constructed a massive farmhouse in her native South Dakota, so she could certainly use the money.

But they also value their privacy more than any other couple on the show.

If Teen Mom 2 comes to an end, Chelsea would in many ways be the least impacted of all the franchise’s cast members.

As such, she may decide that it’s run its course and now is the time for her to just be a stay-at-home mom for a while.

And with her sponsored content and endorsement deals, she’s got several other revenue streams available to her.

As a bonus, her hunky hubs Cole DeBoer is one of very few Teen Mom dads with a real career outside of the show.

David Eason still won’t find a real job, and that knuckle-dragger got fired from MTV over two years ago!

Meanwhile, Cole is earning six figures from the network and still heading off to do real work every day.

So it’s tough to say what Cole and Chelsea might have in mind for themselves come next year.

A spin-off that’s just about her might require more involvement from their kids, and the duo might not want that.

Again, the irony of the most popular Teen Mom star being the one least reliant on Teen Mom doesn’t escape us.

Whatever the case, it’s clear that Chelsea remains one of the most popular reality stars of the decade.

Which means she should have no trouble bringing in the bucks no matter what she decides to do.

What do you think? Down Home DeBoers on MTV?? Or let them be in SD?