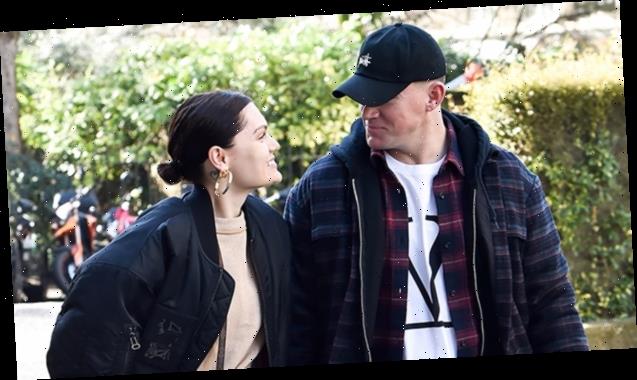 Jessie J posted a cuddly selfie with her man Channing Tatum on Instagram just days after it was revealed that his ex-wife, Jenna Dewan, said that their romance ‘blindsided’ her!

Jessie J, 31, shared two Instagram Stories on Monday, October 21, of her cozied up with Channing Tatum, 39, in front of a ferris wheel. The black and white filtered snaps look similar at first glance, but were actually quite different from one another. He wore his hat backwards in the first before switching it to the front in the second while the “Domino” singer’s stunner shades were on her forehead in pic number one before she wore them appropriately in pic number two. She also got much cozier with him in the second picture compared to the first.

The photos appeared to have taken place while they were at the beach. Jessie also posted several Instagram Stories on Monday of her chilling oceanside with some of her gal pals. Her second to last Instagram Story was of the Magic Mike star putting his arm around her shoulder as they walked around in the distance. This is the first time that she’s posted anything with her hunky beau since she called him her “cuddle machine” in an Instagram Story posted on Wednesday, October 9.

Jessie’s love for Channing goes way beyond social media. She debuted an emotional love song about him at her event “An Intimate Evening with Jessie J and the ROSE Challenge Winners,” at the Troubadour in West Hollywood on Sunday, September 22. Her man was at the show while she sang lyrics to her song “Rose Challenge (Interlude)”. It included heartfelt lyrics like, “Yeah I’m always dreaming ’bout tomorrow that I’m still overthinking yesterday / Where you go I know I’ll want to follow, let’s make a promise on the day.”

Someone who may not be that keen on their relationship, though, is Channing’s ex-wife Jenna Dewan, 38. “There I was, on a plane, alone, finding out about his new relationship…I felt blindsided,” the Step Up star wrote in her book, Gracefully You: Finding Beauty and Balance, which was released on Oct 22. The former couple were married for nearly nine years before announcing their spilt in April 2018. They share one child, a daughter named Everly, 6, together.

Jenna has moved on in the love department herself with Broadway star Steve Kazee, 43. The pair announced on September 24, 2019, that they are expecting their first child together.