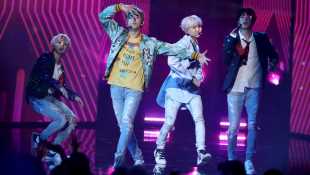 BTS’ Jin got major attention on June 1 when he showed up to Wembley Stadium flaunting newly dyed purple hair and it didn’t take long for the Army to share their opinions about the new and unexpected look on Twitter!

BTS member Jin, 26, debuted a totally eye-catching look when he flaunted bright purple hair at Wembley Stadium in London on June 1, and fans of the K-pop group are absolutely loving it! The hunky performer was rehearsing at soundcheck for the group’s performance later that night when he showed off the new look on stage in front of some fans, and when pics surfaced on Twitter, the Army was all over it!

“HOLY HOT!!!!!! JIN has purple hair my god! this is heaven,” one fan exclaimed while showing off two pics of the talented purple-haired singer holding a microphone on stage. “I can’t even survive seeing Jin’s purple hair through some grainy soundcheck pictures how am i supposed to survive a whole livestream,” another fan wrote. “Jin has purple hair so you know tonight is about to be wild #BTSatWembley,” a third fan posted. The enthusiasm over the hair makeover was so intense that “Jin has purple hair” even became a trending topic on Twitter.

This isn’t the first time Jin’s made headlines for his hair. The funny man decided to cut his own bangs in a video that was shared to the BTS Twitter account in Feb. 2018, and it was pretty hilarious. “I will be cutting my bangs because they’re blocking my vision,” he was translated as saying in the clip, right before he started cutting the front of his locks with a pair of scissors in one hand. Although it started off well, a bit of panic set in at the end as he realized it didn’t come out exactly the way he wanted it to. “Huh? It’s a little…” he said before ending the video.

Jin has showed off various hair colors over the years, so his new purple hair just adds to that list. From the hair dying to the attempt at cutting his own hair, he’s proved he’s not afraid to take risks and it’s one of the many reasons his fans love him!