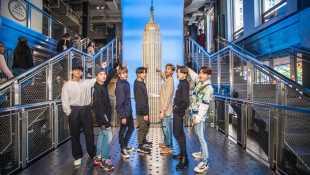 BTS confidently posed in epic photos while visiting the world famous Empire State Building in New York City on May 21 in preparation for their iHeartRadio concert happening later that night.

BTS is on top of the world both literally and metaphorically it seems! All seven of the K-pop group members took the time to visit New York’s famous Empire State Building on May 21, and they posed for some incredible photos during the memorable moment. The talented artists V, J Hope, Jungkook, RM, Jin, Jimin, and Suga, stood in the observation tower, in between two of the building’s staircases and in front of a giant photo of the outside of the building, for their photos and they turned out truly amazing.

In one pic, the smiling studs can be seen posing in various ways, such as crossing arms and putting hands on hips, and in another, they’re all pointing at the giant photo of the building behind them. The guys visited the famous skyscraper in preparation for their special iHeartRadio concert, set to take place on the same night of their visit. iHeartRadio teamed up with the Empire State Building to also celebrate BTS’ success by illuminating the building in purple at the same exact time the concert is going on at the iHeartRadio Theater, so it’s definitely a special day for the guys!

Soon after their visit, fans took to social media to express their pride and excitement about the visit. “They look so happy!” one fan tweeted about the pics. “they’re making the empire state building lit up in purple tonight just for bts,, i’m telling you the world literally revolves around them,” another wrote. “Lighting up the Empire state building in purple for BTS and Army  No one else is doing it like my boys,” a third tweet read.

BTS’ Empire State Building appearance comes after they performed two sold out shows at the MetLife Stadium in nearby East Rutherford, NJ. The shows were part of the American leg of their Love Yourself: Speak Yourself stadium tour, which kicked off at the Rose Bowl Stadium in Pasadena, CA on May 4.

BTS fans can listen to the May 21 iHeartRadio concert in a live broadcast on iHeartMedia’s CHR radio stations and can see it in a livestream at LiveXLive.com at 7 p.m. EST.