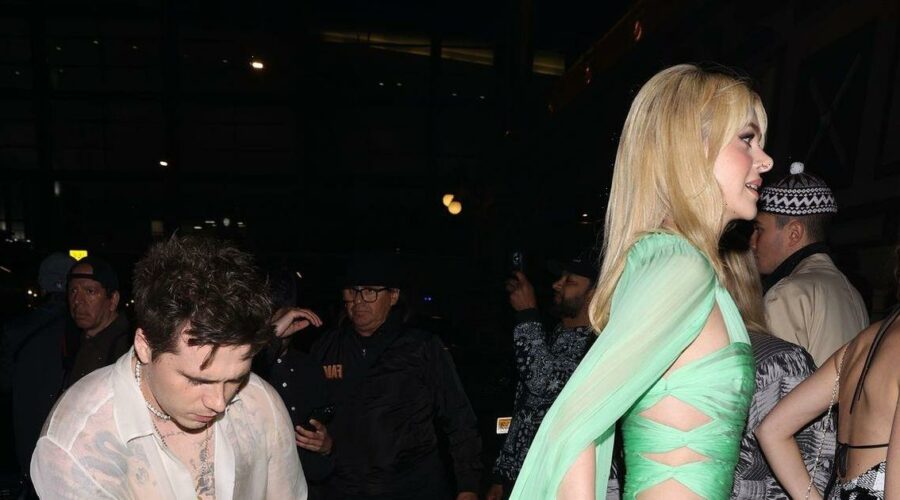 The 23 year old was pictured carrying Nicola’s sweeping mint green gown as they crossed the streets of New York in a thoughtful gesture following their appearance at the 2022 Met Gala held New York City's Metropolitan Museum of Art.

Nicola looked a vision in the flowing design which was comprised of a mint green semi-sheer fabric with draped details and cut out reveals on the side, with a cape and train to finish.

The 27 year old paired her show-stopping afterparty look with towering black suede platform heels and a leather clutch and had her blonde hair worn loosely with slight flicks styled at the fringe.

Brooklyn looked handsome as he carried his wife’s dress wearing a cream shirt which was also semi-sheer, revealing his wide selection of chest and arm tattoos, and matching tailored trousers with a pair of white trainers.

After his act of chivalry, the amateur chef held hands with his wife Nicola as the loved-up couple made their way towards the star-studded event and they were seen enjoying the afterparty in a couple of snaps taken which were shared on Instagram Stories.

One photo posted by a friend of the pair, showed Brooklyn and Nicola leant in towards each other fondly in the midst of the Met Gala afterparty celebrations with the caption: “dad and mum”.

Another shot of Brooklyn taken by his wife was shared on her Instagram as she wrote: “Best husband” with his name tagged afterwards.

The newlyweds' night of partying comes after they made their first public appearance as a married couple earlier that evening at the Met Gala following on from tying the knot last month.

Brooklyn and Nicola held their wedding nuptials at Nicola’s £76 million family estate in front of several celebrity guests in a £3 million ceremony on Saturday 9 April in Palm Beach, Florida.

Nicola wowed the crowd as she made her entrance wearing a vibrant pink Valentino bardot gown with a plunging neckline and draping train, while husband Brooklyn looked dapper in the same ensemble he sported at the afterparty with a cream blazer added.

What stood out mostly was Nicola's dazzling stack of embellished rings on her wedding finger, one of which is reportedly said to be worth an eye-watering £250,000 after she upgraded her original engagement to the large-sized diamond.