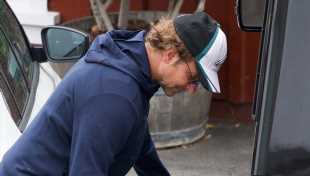 Bradley Cooper has spent the weekend having quality time with his adorable daughter Lea. He sweetly held the two-year-old’s hand as they ran Sunday errands.

Bradley Cooper is so good at dad mode. For the second day in a row the 44-year-old spent it with two-year-old daughter Lea De Seine Shayk Cooper and his partner Irina Shayk, 33, just being a regular happy family. On May 26 the three braved a drizzly day to hit up the Brentwood Country Market for a little shopping and came out with several bags, one from a bookstore. Bradley sweetly held on to Lea’s hand as they approached the family’s car, being an adorably protective daddy.

The A Star Is Born hunk wore a casual dressed down look perfect for a day of running errands, donning faded blue jeans, a navy zip up jacket and a blue and white baseball cap to keep a low profile. His little one matched in the same colors, wearing a navy and white striped shirt, a navy sweater and comfy white kiddie sweatpants. She had her cute blonde hair tucked back into a pony tail. Her mom Irina held up a large brown paper bag to shield herself from the paparazzi.

The outing came a day after the three had more quality family time, as Bradley and Irina took Lea to a park to play in the LA sun then got her a yummy ice cream cone afterwards. Bradley held his little girl in his arms as they left the shop. So it’s a treat to see the family unit have another close-knit outing two days in a row.

As we previously told you, Bradley’s taking advantage of his lighter schedule to spend more time with Irina and Lea now that awards season had ended. Between co-writing, directing and starring in A Star Is Born, then working the awards circuit on its behalf, he’s finally got a little bit down time.“Bradley’s busy working on a number of projects but nothing’s at full tilt right now so he’s able to give Irina a lot of his attention. He’s so grateful for all her support during awards season so now that he’s got more free time he’s showing her lots of appreciation,” a friend of Irina’s told HollywoodLife.com EXCLUSIVELY.