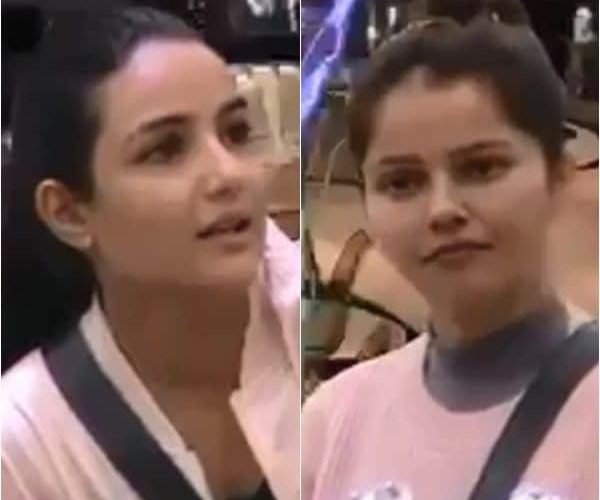 Strict rules have been imposed for freshers in the Bigg Boss 14 house and it has now started causing ugly fights in the house. The freshers are the ones who were rejected during Bigg Boss 14 premiere and were given a chance to enter the show if they complete specific tough tasks assigned by the Toofani Seniors to them. According to the new set of rules, freshers can ask for only 7 items in a day from seniors. These items include basic essentials such as toothbrush or toothpaste or a lipstick. So when fresher Rubina Dilaik asked for a pair of chappal from senior Jasmin Bhasin, their small talk turned into a heated argument.

In last night’s episode of Bigg Boss 14, Rubina said that she is not ready to compromise with her hygiene and the way she functions every morning. She asked for a pair of slippers or shoes from Jasmin who tells her to choose either slippers or shoes since it will become difficult for other members to distribute the daily items.

Rubina argues that both slippers and shoes are essential items for her and puts her foot down saying she won’t compromise on these two things. Jasmin tells her she can take only one item and calls her demands ‘unfair’. Rubina soon loses her cool and complains that Jasmin is not talking sensibly. “People should know where to cross the line,” Rubina passes a strong remark on Jasmin’s behaviour.

Their argument forces Hina Khan and Gauahar Khan to intervene but their efforts to shut down the fight ends in vain.

10/06/2020 Celebrity Comments Off on Bigg Boss 14: Rubina Dilaik fights with Jasmin Bhasin over ‘joote-chappal’; warns her to not cross the line — watch video
TV & Movies