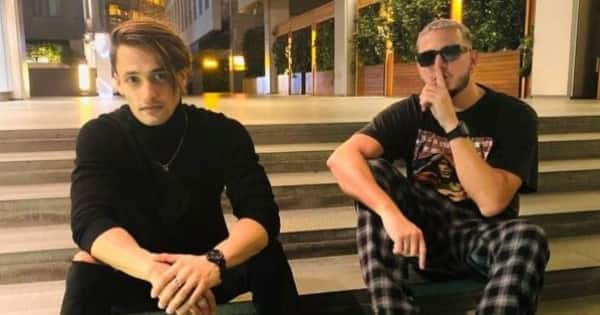 Asim Riaz is an Indian model who gained popularity after his sting in Bigg Boss 13. He went on to be a runner up on the show and enjoyed a massive fan-following throughout. His popularity increased after he featured in several music videos after his sting inside the Bigg Boss house and now, the actor-in-making is likely to have yet another music video coming out. Well, rumour mills are abuzz with the gossip that Asim may collaborate with DJ Snake. Actually, it’s all the fans who have speculated the same.

It so happened that Asim shared videos and pictures on his social media recently, in which he could be seen chilling with DJ Snake. The actor has been using a hashtag #topsecret in his caption which has led to the trend. In the post, we can see Asim and Dj Snake chilling in Dubai. The videos he shared on Instagram stories see them cruising through the streets of Dubai in a car. Check out the pictures below:

Himanshi expressed her excitement by commenting on his post saying, “Wohooo”. Meanwhile, it was earlier reported that Asim Riaz would be entering the house of Bigg Boss 14 as a mentor. And for the same the makers, it was speculated, were offering his a Rs 50 crore. However, that does not seem to be the case.

The handsome hunk bought a swanky car recently and opened up on the happiness buying a new car in an interview. Asim said, “I used to take lift from friends. Sometimes it’s difficult to believe I have got my dream car, but thanks to my fans for supporting me. Just don’t give up. Don’t give an excuse but find a way to do it and you will achieve a lot of stuff in life.” The Dil Ko Maine Dil Kasam actor continued to give motivational thoughts to fans by saying, “Don’t settle for less, let people laugh at your dream. Let people go if they want to but do what your heart desires. If I can do it, you can do it too.”

Are you excited for Asim Riaz X DJ Snake collaboration? Let us know by tweeting to us at @bollywood_life.