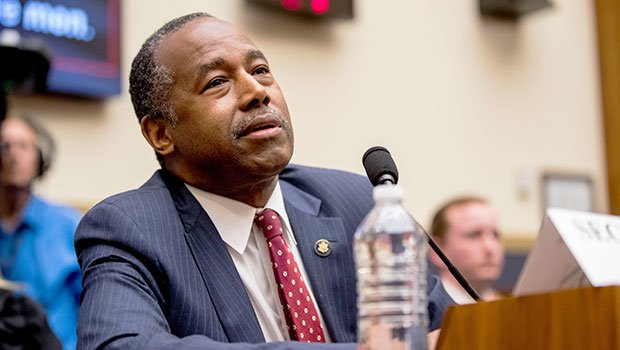 Housing and Urban Development Secretary Ben Carson made headlines on May 21 when he confused the real estate term REO with the cookie term Oreo after being asking about it by Rep Katie Porter at a House Financial Services Committee hearing.

Ben Carson, 67, who currently serves as the Housing and Urban Development Secretary, had a bit of a mix up on May 21 when he seemed to confuse the word “REO”, which means “real estate owned”, with the delicious cookie brand “Oreo” and Twitter users couldn’t resist totally calling him out for it! The former presidential candidate was at a House Financial Services Committee hearing on Capitol Hill in Washington D.C. when Rep. Katie Porter, D-Calif. asked him about disparities in REO rates. It was then that he showed confusion about the word.

“I would also like to ask you to get back to me, if you don’t mind, to explain the disparity in REO rates. Do you know what an REO is?” Porter asked him. “An Oreo…” he replied. “R, no not an Oreo. An R-E-O,” she quickly slammed back. Things continued to get even more awkward from there. “Real estate?” Carson asked Porter. “What’s the O stand for?” she asked back. “E-organization?” he replied.

It didn’t take long for Twitter users to respond to Carson’s mix up with various trolling slams. “What’s better than dunking Oreo cookies in milk? Watching Rep. Katie Porter dunking on Ben Carson for confusing REOs with Oreos. For an HUD Secretary, that’s like confusing origins with oranges. Only the ‘best’ people,” one user tweeted. “Ben Carson for Oreo cookies,” another user tweeted along with a GIF of an Oreo ad.

“Wow. I’m not HUD Secretary, but even I can tell the difference in sound between REO and oreo, between Amway and OMWI. Apparently I’m more qualified to be HUD Secretary than Ben Carson. Sure that surprises no one who pays attention to me. :)” another response read.

Carson took to his own Twitter after the hearing to poke fun at himself with a tweet that showed him posing with a package of Oreo cookies that he intended on sending to Porter. “OH, REO! Thanks, @RepKatiePorter. Enjoying a few post-hearing snacks. Sending some your way!” his tweet read.

Porter and Carson’s tense meeting was held to talk about the current state and plans of the Department of Housing and Urban Development (HUD), which has been receiving some serious criticism over proposals that are requesting to scale back housing subsidies for low-income Americans. Their controversial plans also include removing undocumented immigrants and their children, who were born in the U.S., from subsidized housing. Carson, who has been the secretary of the HUD department since 2017, revealed that he thinks it’s “common sense” to take care of tax-paying Americans first.