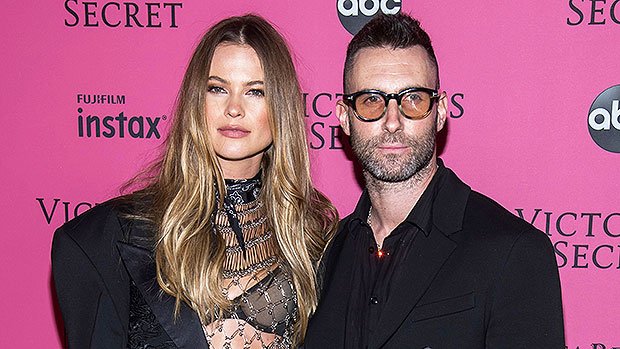 Behati Prinsloo appeared on ‘The Ellen DeGeneres Show’ on May 28 and opened up to the talk show host about possibly expanding her family with her husband Adam Levine in the future.

Behati Prinsloo, 31, gushed about her family with husband Adam Levine, 40, during her appearance on The Ellen DeGeneres Show on May 28 and she even hinted that their brood could get bigger in the future! The gorgeous model wasn’t shy about admitting that both her and her hunky hubby, who is the frontman of Maroon 5, definitely agree on having more kids, but they can’t decide on exactly how many more! “[Adam] wants five,” she revealed to host Ellen DeGeneres, 61, in the interview. “I thought I wanted five, but now I think maybe three or four would be good. I’m backing [up], but just by one. Adam can’t have everything. I’m carrying them!”

Behati and Adam, who married in 2014, are already the parents of Dusty Rose, 2, and 15-month-old Gio Grace and in addition to talking about her plans for more kids, Behati reminded everyone that Ellen was responsible for naming their first-born. After Adam texted Ellen and asked her for advice on baby names before their daughter’s arrival, the funny lady sent him a list that included Dusty Rose. Although Behati admitted she didn’t like it at first, she eventually came around.

“I was like, ‘Dusty?’” she told Ellen about her reaction to Adam’s suggestion. “My parents are going to think it’s a piece of dust. They’re Afrikaans. English is not their first language. ‘Dusty, no way — no no way.’ But as the months went by and the belly grew and the name kept coming in and out … She was born and she was a Dusty.”

Although both Behati and Adam have been very busy with their careers over the years, now that they have two children and are thinking of having more, it seems they are willing to calm things down a bit. Adam announced last week that after 16 seasons, he would not be returning as a coach on the singing competition show The Voice. “It was time to move on,” he said about his departure in a statement on Instagram. Perhaps moving on means having a bigger family? We can’t wait to find out!