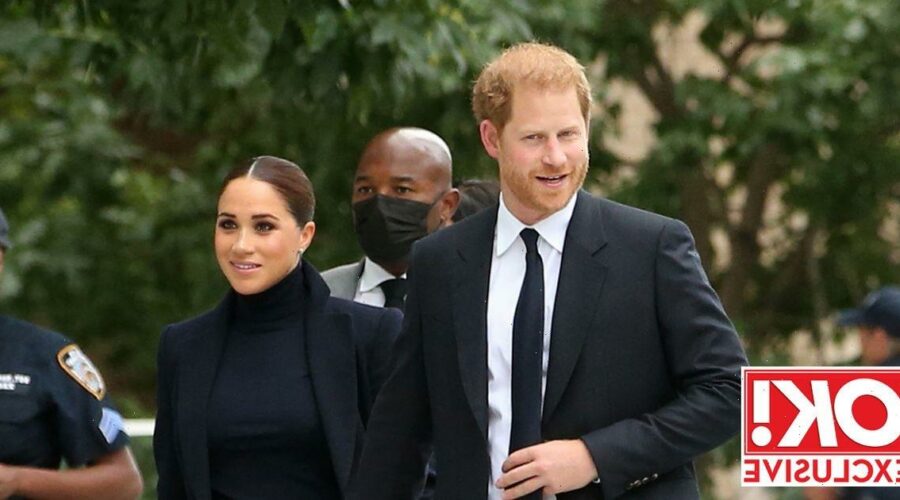 Prince Harry and Meghan Markle made their first public appearance together since the birth of daughter Lilibet in June, paying a visit to the One World Trade Centre in New York.

But looking at images of the couple together, body language expert Judi James believes the Prince was masking inner anxiety as he let his wife take the lead.

Judi explains: "Harry's self-checking rituals of touching his jacket and fiddling with the button did suggest inner anxiety and his closed-lip smiles for the camera dropped quickly once the pose was over.

"He looked supportive but there was a sense that this was Meghan’s moment. She posed ahead and led into the building and her eye-engage with the cameras emphasised she was very much on her home turf here."

She added: "This was a somber venue for the couple’s first outing together as a power-couple since the birth of their daughter and apart from some brief smiles and low-held waves to the fans on the way in, the couple seemed to keep their body language rituals low-key and virtually PDA-free.

"Their hand clasp is a signature look for them but as they posed up together inside the venue there were some signs of awkwardness after Meghan’s break, with Harry placing an arm around her back and throwing her a couple of glances that suggested reassurance."

Harry and Meghan were joined by New York City’s mayor Bill de Blasio and Governor of New York State, Kathy Hochul, in the observatory located on floors 100-102 of the One World Trade Centre.

The couple are also reported to have met with Mr de Blasio’s wife, the first lady of New York, writer and activist Chirlane McCray, and their son Dante de Blasio.

Harry and Meghan were seen entering the building hand-in-hand as they waved to the waiting press.

Meghan wore an all-black outfit of trousers and a polo neck jumper under a black coat with her hair swept back into a bun with a middle parting.

She teamed her outfit with black heels and husband Harry wore a black suit with a white shirt and a black tie.

The pair were seen putting on black protective face masks before entering the building.

Their visit to the site of the original twin towers comes just two weeks after the 20th anniversary of the September 11 attacks.

While in New York, Harry and Meghan will be attending Global Citizen Live on Saturday, which is taking place in Central Park.

For the latest royal news and updates, sign up to our daily OK! newsletter.