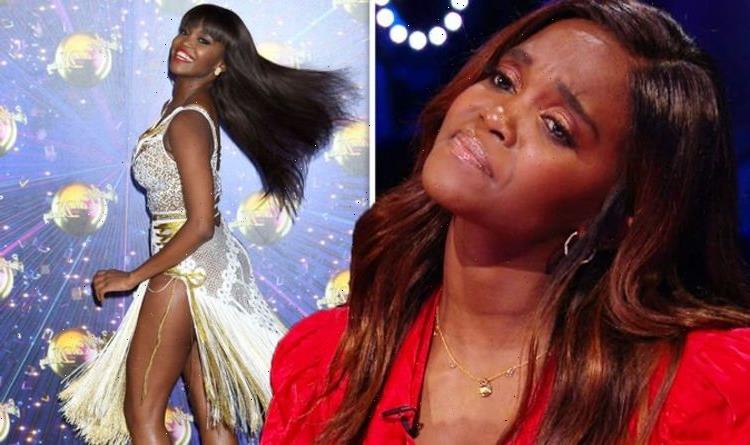 Oti Mabuse, who is a two-time champion on Strictly Come Dancing, has revealed that there is a possibility that she will bid farewell to the dance competition after seven years on the BBC show. It comes after the professional dancer has joined rival network ITV for the new series of Dancing On Ice.

Since the news was announced that Oti, 31, would replace John Barrowman on the judging panel, her role on Strictly has been called into question by fans.

The dancing champion has since addressed the rumours and said that an “announcement will be made”.

Speaking in a new interview, Oti addressed her time on the BBC show and added she wanted to “learn and grow”.

Speaking to OK! magazine, she explained: “There will be an announcement that will be made later, but I think for me, as a person in entertainment, I really want to learn and grow.”

Oti, who also appeared on ITV’s hit show The Masked Dancer, continued to reflect on her goals for the future, adding that she wants to build a successful and “long career”.

The star, who was born in South Africa, explained: “I want a long career, especially in this country.”

“I moved all the way from Africa, so I have to make something of myself, so I’m really trying to learn and do as much as I can for as long as I can, while I can.”

Oti admitted that she is thrilled to be have joined the Dancing On Ice panel as a new judge.

She said: “I’ve done a couple of panel shows where I’ve been like a dance captain, dance detective, or something, but I’ve never been called a judge.

“I love competition and watching people learn new skills and try to get better every single week.”

“It’s a journey I absolutely enjoy to be a part of and watch. To know that I am doing it now with ice skating is very, very exciting for me. I literally can’t wait, I am buzzing!”

The on-screen star took to Instagram this week and shared some exciting news after she announced a new TV role.

The Masked Dancer judge has shared that she will be hosting a brand new ITV programme, Romeo and Duet.

Oti admitted she “couldn’t believe it” as she shared her delight over her latest move.

In view of her 637,000 followers, she began: “My heart is just filled with excitement and joy about this announcement.

“I’m so thrilled to be the host of the brand new ITV show Romeo & Duet due to air later on this year.”